Development in India: A Capabilities-Based Assessment

IntLawGrrl Diane Marie Amann wrote last year about the Asian Century symposium at the University of California, Davis, School of Law. Now, the symposium issue of the UC Davis Law Review is near publication, and I am taking this opportunity to discuss my contribution. (credit for symposium poster at left)
My Article, Human Rights and Development for India’s Rural Remnant: A Capabilities-Based Assessment, discusses three related issues of great significance to all of Asia:
► The rural-urban income gap, which is greater in Asia than in any other region of the world;
► The rampant pace of rural-to-urban migration; and
► The need for sustainable rural development.
Martha Nussbaum of the University of Chicago was the keynote speaker for the symposium, and my analysis of these issues is based on the capabilities framework that she and Nobel Prizewinning economist Amartya Sen developed. Just as Nussbaum and Sen have asserted that gender and disability are among key variables that should influence nation states’ efforts to endow their citizens with a full array of capabilities, I argue that geography, too, is a critical factor to which governments must attend.
An abstract for the article follows:
While the cachet that India currently enjoys on the world stage is linked largely to the booming high-tech and service economies associated with its megacities, in terms of sheer numbers, India is not an urban nation. About a third of India’s population lives in urban areas, though 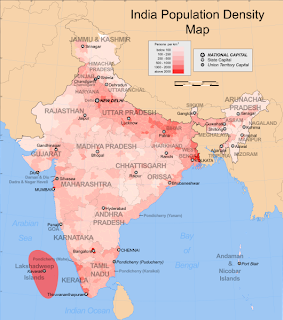 that figure is rising quickly. One projection indicates that 31 villagers will continue to show up in an Indian city every minute over the next 43 years — 700 million people in all. (credit for map indicating population density, with reddest areas densest)
Lack of sustainable development in rural areas is a major force behind the massive rural-to-urban migration across Asia. An enormous challenge currently facing India and many of its neighbors is thus how to manage the migration.
One aspect of that challenge is providing for the nation’s rural remnant — for those who are left behind in villages and towns as cities burgeon and sprawl. To mitigate rural-to-urban migration and accommodate growth that is sustainable both environmentally and economically, India must attend to rural development. This means responding to infrastructure deficits in order to meet some very basic needs (e.g., water, sanitation), but it also means providing education and health care, along with rural economic development through strategic thinking about agricultural production and job creation. Meeting this challenge has clear implications for how India distributes government resources.
This Article considers India’s uneven development across the rural-urban axis through the lens of the capabilities framework developed by Sen and Nussbaum. The capabilities approach argues for universal human rights based on a recognition of each human being “as an agent and an end,” and it calls for a “threshold level of each capability” below which citizens are not truly functioning as humans. Nussbaum also refers to equality as an aspect of capabilities, linking it in particular to dignity and seeing it as a salient concern in relation to core socioeconomic rights, such as those to health care and education.
Nussbaum’s thinking on capabilities has been greatly informed by her time in India and by the situation there. Further, Nussbaum references the rural-urban axis as among the power disparities relevant to citizens’ realization of capabilities.
In using a capabilities frame for assessing India’s approach to rural development, this Article attends particularly to the life, bodily health, and education capabilities, arguing that India should aspire to a degree of parity across the rural-urban axis in providing these foundational capabilities. The Article analogizes rurality to disability and gender as a crucial characteristic to which government should attend in programming to meet the needs of rural citizens. The Article also considers briefly the potential of the Indian Constitution to mitigate distributive inequities associated with government’s relative neglect of rural populations.
Finally, the Article discusses what is at stake for India and the rest of Asia in staking out a path of sustainable development that explicitly considers the rural-urban axis. This path should move beyond the parallel tracks of urban planning and rural development, so that development and planning go hand in hand along the rural-urban continuum and across the nation. Regional towns and small cities are sure to be a critical part of any solution to the present state of grossly uneven development.