(It’s an honor to contribute this guest post to IntLawGrrls. Thank you for the opportunity to blog about my article, "False Dichotomies of Transitional Justice, Gender, Conflict and Combatants in Colombia." I recently had the pleasure of discussing this research at the University of Baltimore’s Center for Applied Feminism’s Conference, “Applying Feminism Globally” – I’m grateful to all the organizers and participants of that inspiring gathering. I welcome any comments!) 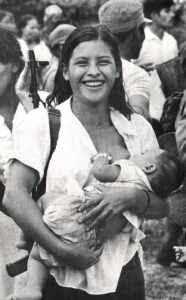 In Colombia’s decades-long armed conflict, one-fourth to one-third of combatants are female. As in many countries throughout the world, in Colombia, conflict disproportionately affects women’s lives, resulting in high incidences of rape, sexual violence, and widespread economic and social disadvantage.
► Yet if a woman has perpetrated human rights abuses as a combatant, but has also suffered as a victim of rape or sexual violence, is she a perpetrator or a victim?
► If women may be both perpetrators and victims, might this require us to question whether men’s roles are similarly complex?
► And how should transitional justice mechanisms, implemented with the goal of reshaping society after conflict and accounting for past human rights abuses, view these individuals who embody the complexity of human experience during conflict?
These questions highlight the complex and fluid nature of gender identities during conflict. My article posits that transitional justice mechanisms have failed to adequately consider the role of gender in post-conflict societies. I explore this question by exposing three central concerns with the field as inaccurate reflections of the realities experienced by both men and women who are affected by conflict. The false dichotomies exist: (1) between the conflict era and the post conflict era; (2) between public and private space; and (3) between the commonly-employed legal concepts of victim and perpetrator. These dichotomies, I argue, not only affect the way the women exist during and after conflict, but affect men’s identity and relationship to conflict to an equal degree.
In order to explore these dichotomies, this paper traces the evolution of feminist thinking on the topics of transitional justice and international law:
► A first generation focused on developing international criminal law to recognize the special character of sex crimes against women;
► A second generation cautioned that women in post-conflict societies often deny that the sexual violence they experienced was the worst thing that happened to them (in comparison, for example, with the murder of their children or the destruction of their communities); and finally,
► A third, gender-oriented group of scholars now cautions that women may, paradoxically, experience greater autonomy and less domestic violence during conflicts than during the post-conflict status quo.
After tracing the evolution of feminist thinking on transitional justice, I examine the ways in which gender and conflict intersect in Colombia. Building on existing feminist scholarship, I advocate for a gender-oriented perspective on transitional justice, through examining 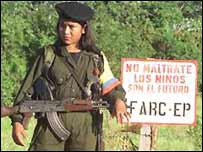 how women who have suffered the horrors of conflict may also have been the perpetrators of some of these horrors. I utilize the experience of female combatants as a lens through which to consider this intersection, as female combatants are an under-reported and under-examined element within many conflicts globally. Additionally, their very presence puts pressure on traditional gender roles, and thereby challenges the three false dichotomies that I claim transitional justice relies upon.
I address the problem of reintegrating female combatants in Colombia’s violent conflict into civil society after they have left armed groups, and also consider what leads these women to join armed groups. In doing so, I demonstrate the centrality of exposing the false assumptions regarding the role of transitional justice in achieving sustainable post-conflict structures, and potentially, in preventing conflict before it begins.
Furthermore, this paper extends these considerations to the role of gender more broadly within society. I propose that if women experience roles as both perpetrators and victims during conflict, then the field of transitional justice will benefit from questioning whether men’s roles may be similarly complex and multi-faceted.
Recognizing that any measure taken to rebuild society after conflict is necessarily imperfect, and is frequently implemented with the imperative to act rapidly, the paper contemplates multiple suggestions for reform that stem from this analysis. Some practices proposed include:
► Disarmament, Demobilization, and Reintegration (DDR) programs that specifically consider the unique needs of male and female combatants;
► Implementation of parallel systems of transitional justice that address needs of distinct sectors of society;
► Societal efforts to counter the multi-layered stigma that women fighters may confront not only because they fought, but because they have transgressed societal expectations regarding gender; and finally,
► Investment in long-term development of rule of law and institution building from a gender-aware perspective.
Although the field of transitional justice has made great strides in addressing harms perpetrated against women in wartime in the aftermath of conflict, it is crucial that transitional justice mechanisms surpass the limitations of these three false dichotomies with regard to the role of gender in conflict. An era in which transitional justice is being implemented provides a tremendous opportunity to transform society. If the opportunity to consider the crucial role that gender plays is ignored, scholars and practitioners of transitional justice risk reinforcing gendered norms that offer men and women constricted opportunities in post-conflict societies. In order for transitional justice mechanisms to achieve success in reordering society to promote just systems that confront past trauma and human rights abuse, it is crucial that these assumptions be questioned both by scholars and practitioners.