Go On! Briefing on the International War Crimes Tribunal in Bangladesh

On May 19, 2011, the American Society of International Law, together with the Crimes of War Education Project and the Center for Human Rights and Humanitarian Law of American University Washington College of Law, will host a briefing on the International War Crimes Tribunal of Bangladesh. The event will be held at the Tillar House (2223 Massachusetts Ave., N.W., Washington, D.C.) from 12:00pm to 2:00pm. You can register for the event here.

The event will feature a presentation by U.S. Ambassador at-Large for War Crimes, Stephen Rapp (below left), with commentary by Caitlin Reiger, Director of International Policy Relations at the International Center for Transitional Justice and John Cammegh of 9 Bedford Row (London) and a former defense counsel in the Special Court for Sierra Leone.
T 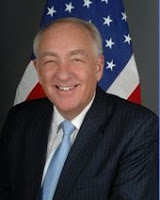 he briefing and discussion will address recent efforts to restart the forty-year-old effort in Bangladesh to bring to justice those responsible for war crimes, crimes against humanity, mass rape, and genocide dating to the 1971 War of Liberation from Pakistan. The International Crimes Tribunal was established by the International Crimes (Tribunals) Act in 1973 and later amended in 2009.
Many welcome the tribunal as addressing a longstanding need for accountability for crimes committed during the conflict, which is seen as one the largest humanitarian crises in modern times, as up to 3 million people were tortured to death or killed, 200,000 women raped and ten million refugees were forced to flee to neighboring India.

The Tribunal as it is being implemented has also drawn heavy criticism from within Bangladesh and the international community (including the War Crimes Committee of the International Bar Association) as being politically motivated, pointing out, for example, that the rules and procedures carry scant due process protections and are not on par with well-accepted international criminal tribunals, such as the ITCY and the ITCR. At the invitation of the Bangladesh Government, Ambassador Rapp spent time in Bangladesh earlier this year and just last month, he submitted numerous recommendations to the Bangladesh Government regarding the ICT standards.
The briefing at the Tillar House promises to be an interesting and enlightening event.