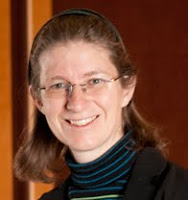 It's IntLawGrrls' great pleasure to welcome Anastasia Telesetsky (right) as today's guest blogger.
An Associate Professor of Law at the University of Idaho College of Law in Moscow, Idaho, Anastasia teaches Conflicts of Law, Public International Law, International Environmental Law, and International Trade and Investment Law. She's published numerous articles in those areas.
She joined the Idaho law faculty in 2009. Before that, she'd worked for 8 years in public international law and environmental law in California, Washington, and abroad. During that time she helped to represent the Government of Ethiopia before the Ethiopia-Eritrea Claims Commission, on which IntLawGrrl Lucy Reed served as a Commissioner, at the Permanent Court of Arbitration. As a Bosch Fellow, Anastasia worked for the German Foreign Ministry on international food security issues. As a Fulbright Fellow and a Berkeley Human Rights Center fellow, she collaborated with communities in the Philippines and Papua New Guinea on environmental protection problems.
Anastasia holds a bachelor's degree in anthropology from Vanderbilt University and a master's degree in the same field from the University of California, Santa Barbara. She earned her J.D. at the University of California, Berkeley, and her LL.M. at the University of British Columbia.
In her guest post immediately below, Anastasia describes a recent roundtable on how to improve International Environmental Governance, and she welcomes further collaboration on this question.
Anastasia (prior IntLawGrrls post) dedicates her post to the American attorney and Presidential candidate Belva Lockwood (1830-1917), for reasons she described in a guest post further below.
by Diane Marie Amann at 7:30 AM