It's IntLawGrrls' great pleasure to welcome Ingrid Wuerth (right) as today's guest blogger.
Ingrid is Professor of Law and Director of the International Legal Studies Program at Vanderbilt University Law School in Nashville, Tennessee. She joined the Vanderbilt faculty in 2007, having been a professor at the University of Cincinnati College of Law.
Her research and teaching focus on foreign affairs, international law, and comparative constitutional law, as reflected in her publications. She's also working on a Comparative Constitutional Law casebook for Aspen Publishers. In her guest post below, she analyzes U.S. jurisprudence respecting the use of federal common law in the interpretation of the Alien Tort Statute.
Ingrid was graduated Order of the Coif from the University of Chicago Law School, where she served on the Law Review. Thereafter she served as a law clerk for Judge Jan E. DuBois of the U.S. District Court for the Eastern District of Pennsylvania and Judge Jane R. Roth of the U.S. Court of Appeals for the Third Circuit, then practiced law at Dechert, Price and Rhoads in Philadelphia.
She's twice been a research fellow in Berlin, Germany, once as a Chancellor's Scholar of the Alexander Humboldt Foundation and later as a Fulbright Senior Scholar. Currently she serves as Co-Chair of the Interest Group on International Law in the Domestic Courts of the American Society of International Law.
Ingrid chooses to honor the woman below left (photo credit), about whom IntLawGrrls already have posted. Ingrid writes: 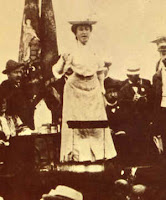 I dedicate my post to Rosa Luxemburg, an early 20th century socialist/communist philosopher.
Intellectually, she was not much a feminist, as she saw most issues in terms of class warfare rather than gender. There is much to disagree with in her political writing, yet she also an influential intellectual leader and productive, important scholar. She left the social-democratic party in 1914 because she opposed the war, and 1918 she co-founded the German communist party. In January 1919 she was murdered and her body dumped in the Landwehrkanal along a particularly pretty stretch that is now a beautiful place to run. In Berlin one is never far from tangible reminders of brutality, political repression, and daily acts of almost unspeakable horror

(credit for bottom right photo of memorial) Luxemburg joins IntLawGrrls' other transnational foremothers in the list just below our "visiting from..." map at right.
Heartfelt welcome!
by Diane Marie Amann at 6:00 AM