It's IntLawGrrls' great pleasure to welcome Lynsay Gott (right) as today's guest blogger.
Lynsay is the Program Director at Human Rights USA in Washington, D.C. She joined that nongovernmental organization in 2007 as an Equal Justice Works Fellow, having served there as a legal intern with the organization for one year.
During her fellowship, Lynsay focused on the loopholes in U.S. law that limit the availability of asylum protections and mandate the return of some victims of human trafficking to their countries of origin where they were originally victimized. Her law review comment on this issue, “Unrealistic Burdens: How the T visa and Asylum Law Fail to Protect Many Victims of Trafficking,” was published in the Immigration and Nationality Law Review. Lynsay's work to establish asylum protection for trafficked persons has now expanded to pursuing civil remedies for survivors of trafficking.
In her guest post below, Lynsay compares the approach taken by the European Court of Justice in a recent immigrants' right decision with that taken by the U.S. Department of Justice in its challenge to Arizona's immigration law.
Holder of an M.A. in anthropology from the University of Cincinnati, Lynsay received her J.D. from the University of Cincinnati College of the Law.
Lynsay dedicates her post to Dr. Rhoda Halperin (below left), Professor of Anthropology at Cincinnati until 2009, when she died suddenly and unexpectedly from acute leukemia at age 62. Lynsay writes:

She was an anthropologist and a feminist, and my advisor during my master's studies in anthropology. A lot of Rhoda's work 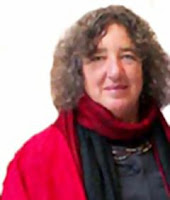 focused on economic and social justice, and the empowerment of marginalized communities, and of women in particular. It was through her influence that I entered the legal field, changing my career path from human rights research to human rights legal advocacy. She received her PhD in anthropology from Brandeis. I could not describe her any better than her colleague, Dr. Suzanne Scheld, who in this memorial article described in detail Rhoda's unique approach to feminism and social justice.

Today Halperin, whose last book was Whose School is It?: Women, Children, Memory (2006), joins IntLawGrrls' other foremothers in the list just below our "visiting from..." map at right.
Heartfelt welcome!
by Diane Marie Amann at 6:00 AM