It is IntLawGrrls' great pleasure to welcome Shana Tabak (left) as our guest today. Shana is a Visiting Professor of Clinical Law and a Friedman Fellow with the International Human Rights Clinic at the George Washington University Law School.
Shana received her B.A. from Macalester College and her J.D. from the Georgetown University Law Center. Prior to joining GW Law, she served as a law clerk for Judge Bernardo Sepúlveda-Amor at the International Court of Justice.
Shana has also worked with several non-governmental organizations on human rights in Latin America and the Middle East, including the Lawyers Committee for Human Rights (now Human Rights First) in New York, and Gisha: Legal Center for Freedom of Movement in Israel. She was a Fulbright Scholar in Bolivia, where she conducted independent research on migration, human rights and development. She has published on international criminal law with the Georgetown Journal of International Law, and has spoken on transitional justice and feminism at Oxford University.
Shana's guest post below discusses her paper, "False Dichotomies of Transitional Justice," which she presented last month at the Applying Feminism Globally conference at the University of Baltimore School of Law.
Shana dedicates her post to her transnational foremother, Ella Baker (pictured below right). Baker (1903-1986) partnered with such names as W.E.B. Du Bois, Thurgood Marshall, Dr. Martin Luther King, and Rosa Parks in distinguishing herself as one of the leaders of the civil rights movement. For over five decades, Baker led and mentored young activists in organizations including the NAACP, the Southern Christian Leadership Conference, and the Student Non-Violent Coordinating Committee, fomenting change based on ideologies of non-violence, economic justice, racial equality and human rights.
Baker said of herself, 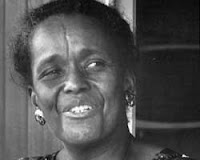 'You didn't see me on television, you didn't see news stories about me. The kind of role that I tried to play was to pick up pieces or put together pieces out of which I hoped organization might come. My theory is strong people don't need strong leaders.'

I’m inspired by Ella Baker’s faith in man and womankind to find strength within themselves, and her vision of community-led change. She played a crucial behind-the-scenes role in nearly every major activist group of the civil rights movement, and worked to promote human rights for all Americans. She articulated her work not as fighting for the freedom of Black Americans, but for 'the freedom of the human spirit, a larger freedom that encompasses all mankind.'

And, as if her contributions to the civil and human rights movement was not enough, Baker, who joins IntLawGrrls' other foremothers in the list just below our "visiting from..." map at right, was also the inspiration for a Sweet Honey in the Rock work: Ella’s Song, or, “We who believe in freedom cannot rest.”
Heartfelt welcome!

Welcome, Shana! Great to see a fellow Mac-ite on these pages.