A policy of not recognizing Jerusalem as part of the state of Israel is about to be tested in the U.S. Supreme Court.
Yesterday the Court agreed to review a decision below in M.B.Z. v. Clinton, which presents the following question:

Whether the 'political question doctrine' deprives a federal court of jurisdiction to enforce a federal statute that explicitly directs the Secretary of State how to record the birthplace of an American citizen on a Consular Report of Birth Abroad and on a passport.

The case began 9 years ago, when U.S. citizens, Ari and Naomi Zivotofsky, gave birth to a boy whom they named Menachem Binyamin. The U.S. State Department refused to record the Jerusalem hospital birth has having occurred in the state of Israel -- a refusal related to Executive Branch efforts to negotiate a settlement in the chronic dispute between Israelis and Palestinians respecting the status of the city. (credit for map, courtesy of State Department)
The executive policy underlying the department's refusal ran counter to Section 214(d) of the Foreign Relations Authorization Act for 2003. The provision stated:

For purposes of the registration of birth, certification of nationality, or issuance of a passport of a United States citizen born in the city of Jerusalem, the Secretary shall, upon the request of the citizen or the citizen’s legal guardian, record the place of birth as Israel.

The Act became law when President George W. Bush signed it on September 30, 2002 -- but only after Bush voiced objection to the provision via this signing statement: 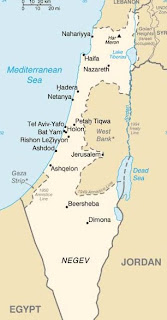 Section 214, concerning Jerusalem, impermissibly interferes with the President's constitutional authority to conduct the Nation's foreign affairs and to supervise the unitary executive branch. Moreover, the purported direction in section 214 would, if construed as mandatory rather than advisory, impermissibly interfere with the President's constitutional authority to formulate the position of the United States, speak for the Nation in international affairs, and determine the terms on which recognition is given to foreign states. U.S. policy regarding Jerusalem has not changed.

The parents invoked the statute as the basis for their lawsuit, but the U.S. Court of Appeals in the District of Columbia dismissed on the ground of political question.
In its filing available here, the Obama Administration agreed with its predecessor that the U.S. Constitution gives the President "sole discretion" on how to term the child's place of birth. Whether that is correct is a question that awaits deliberation by the Court.