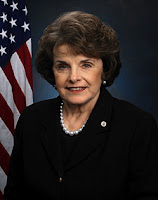 Dianne Feinstein, who'd been briefed on exactly what happened on Sunday in Pakistan, said the breakthrough did not come from information gleaned at Gitmo or through enhanced interrogation -- ie, waterboarding.
'To the best of our knowledge,' she said, 'based on a look, none of it came as a result of harsh interrogation techniques.'

-- U.S. Senator Dianne Feinstein (D-California) (above right), quoted by Slate at a press conference yesterday. Feinstein, who is the Chair of the Senate Intelligence Committee, pushing back on the claims of some that the Bush Administration's post-9/11 detention-for-interrogation policies (about which yours truly has written in articles available here) were essential to the successful operation in which, as posted, U.S. special forces on Sunday killed al Qaeda leader Osama bin Laden at a compound in Pakistan. Although Attorney General Eric Holder hedged on the question, Senator Lindsey Graham confirmed Feinstein's account. The South Carolina Republican 'called the claim that waterboarding was essential to bin Laden's capture "a misstatement."'