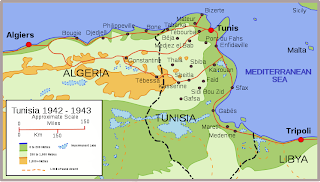 On this day in ...
... 1943, Allied forces declared victory in the armed conflict in Africa, one of many theaters of World War II combat. The New York Times reported that the British had captured the "Prussian Commander in Chief of the Axis forces in North Africa," and that approximately 110,000 German and 40,000 Italian troops also had fallen into Allied custody in the previous week's "final assaults" on 2 cities in Tunisia, the national capital of Tunis and a regional capital, Bizerte. (map credit)