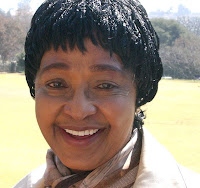 On this day in ...
... 1991 (20 years ago today), a court in South Africa sentenced Winnie Madikizela-Mandela to 6 years in prison following her conviction for involvement in the abduction of four youths, one of whom subsequently died. Married years earlier to Nelson Mandela, the African National Congress leader whom South African authorities had released in 1990, she'd remained active in anti-apartheid throughout his nearly 3-decade-long incarceration. On this day in 1991 she was released on bail pending appeal. Two years later, the BBC reported, she'd receive a reduced punishment: a fine of 15,000 rand (£3,200), plus a suspended 2-year prison sentence. She and Nelson Mandela would become South Africa's President in 1994; the couple would divorce in 1996; and he would marry his current wife, U.N. expert Graça Machel, in 1998. Madikizela-Mandela (above right) has been a member of South Africa's Parliament since 2009. (photo credit)