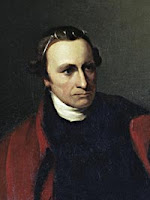 On this day in ...
... 1765, a newly elected member of Virginia's colonial legislature celebrated his 29th birthday by speaking out against the Stamp Act that Britain had imposed on the American colonies. Patrick Henry 's principal complaint was that the statute constituted impermissible taxation without representation; in a direct challenge to the power of Parliament, Henry (left) asserted that only colonial legislatures could tax their constituents. (image credit) He is said to have punctuated the thought with the following protorevolutionary declaration:

'If this be treason, make the most of it.'