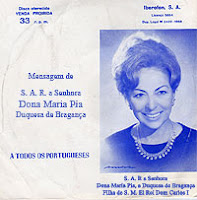 On this day in ...
... 1995, Maria Pia de Bragança (left) died in Verona, Italy, 88 years after she'd been born to a single mother in Lisbon, Portugal. She contended that her father was King Carlos I of Portugal (1863-1908). In the course of her life she traveled widely, lived in exile during times of war, married 3 times, gave birth to 3 children. Notably, she published magazine articles and books, in Spanish and in French, often under pseudonyms such as Hilda de Toledano and Maria Pia de Saxe-Cobourg Bragance. Publication in 1957 of her memoir launched her decades-long, unsuccessful bid to claim the Portuguese throne. (credit for photo of record album disseminating this claim)