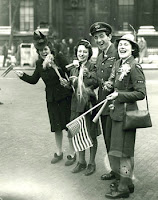 On this day in ...
... 1945, according to the BBC, "[h]uge crowds, many dressed in red, white and blue, gathered outside Buckingham Palace in London and were cheered as the King, Queen and two Princesses came out onto the balcony." The reason for the outpouring: Prime Minister Winston Churchill had just broadcast the news that at least for the European theater, World War II was over. (credit for Keystone photo, taken at Whitehall, London, as "an RAF officer and two members of the Women's Royal Air Force and a civilian celebrate on VE Day 1945") End to war in the Pacific theater would not come for many more months.