Peace, Reconciliation and the Power of Speech 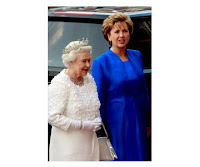 It is perhaps ironic, that on a week when two women made speeches that represented for many the culmination of a long and painful process of peace-making on this island, others were being prevented from expressing their speech through posters and protests close to Dublin Castle where a state banquet was held to honour the first ever state visit of a British Monarch to the Republic of Ireland. These four days, when Queen Elizabeth II and her husband, Prince Philip the Duke of Edinburgh, are officially visiting us here in the Republic of Ireland the city of Dublin has been on an extremely disruptive ‘lock down’; streets are closed for hours at a time, people who mistimed their commutes (even by foot) cannot get to work or home for hours, trains are stopped or delayed and so on, and people who want to see the Queen—either to welcome her or to voice their discontent with her presence—are finding it extremely difficult to get at all close (Irish Times article on the security operation). All of this, of course, raises serious concerns about civil liberties in Ireland: stop and search powers are being exercised, freedom of expression is being strictly curtailed (even, this video suggests, going so far as some people being prevented from bringing our national flag through police check points), and millions of Euro being spent on security when we can no longer afford residential care for our older people. All of these are genuine and serious concerns, and I think it may well be the case that the security operation has been somewhat over-reactive. That said, however, this visit has so far been filled with moments of such awesome significance that one might argue these restrictions can be justified and—one hopes—that if the Queen visits again security can be relaxed somewhat.

Those moments of significance have been many indeed: the Queen, dressed in an emerald green coat and St Patrick’s blue dress and wearing a beaming smile, stepped onto the soil of the Republic of Ireland on Tuesday afternoon to be met by Éamon Gilmore, our Tánaiste (deputy Prime Minister); the Queen, wearing pure white, laying a wreath and bowing her head to the fallen who fought for Irish freedom at the Garden of Remembrance following which both God Save the Queen and Amhrán na bhFiann (the Irish national anthem) were played; the Queen visiting Croke Park where, in 1920, fourteen innocent Irish people were massacred during a match in alleged retaliation for the killing of British soldiers; and the Queen honouring the almost 50,000 Irish men and women who died in British uniform in the Great War at the War Memorial in Islandbridge. All of these have been moments that, quite frankly, were unimaginable fifteen years ago. But the moment of the greatest significance, and the greatest weight, was surely at the State Banquet last night when both the Irish President Mary McAleese, and HRH Queen Elizabeth II, gave their speeches.

The President—who famously writes all her own speeches and is a former law professor at Trinity College Dublin—gave what is surely the speech of her Presidency. The full speech is available here, but here is where she dealt with the knotty question of our violent and turbulent history:

It is only right that on this historic visit we should reflect on the difficult centuries which have brought us to this point. Inevitably where there are the colonisers and the colonised, the past is a repository of sources of bitter division. The harsh facts cannot be altered nor loss nor grief erased but with time and generosity, interpretations and perspectives can soften and open up space for new accommodations. Yesterday, Your Majesty, you visited our Garden of Remembrance and laid a wreath there in honour of the sacrifice and achievement of those who fought against Britain for Irish independence. Today at Islandbridge, just as we did at the Island of Ireland Peace Park at Messines in 1998, we commemorated together the thousands of Irishmen who gave their lives in British uniform in the Great War.

As the first citizen of Ireland, like my fellow countrymen and women, I am deeply proud of Ireland’s difficult journey to national sovereignty. I am proud of how we have used our independence to build a republic which asserts the religious and civil liberty, equal rights and equal opportunities not just of all its citizens but of all human beings. I am particularly proud of this island’s peace-makers who having experienced first-hand the appalling toxic harvest of failing to resolve old hatreds and political differences, rejected the perennial culture of conflict and compromised enough to let a new future in.

The Queen—wearing a white dress adorned with 2091 hand sewn shamrocks and a striking diamond harp broach—then responded with her own speech, which she opened in the Irish language greeting the assembled diners as ‘A Uachtaráin agus a chairdre’; ‘President and friends’. Even that—the Queen of England speaking Irish in Dublin Castle—was enough to bowl most people over, and the diners applauded her for what we affectionately know as ‘the cúpla focal’ (the few words of Irish). Again the text of the Queen’s speech is available here, and can be viewed on the website of RTÉ (the national broadcaster) here. The Queen went on in a way that did not avoid history either:

Madam President, speaking here in Dublin Castle it is impossible to ignore the weight of history, as it was yesterday when you and I laid wreaths at the Garden of Remembrance.

Indeed, so much of this visit reminds us of the complexity of our history, its many layers and traditions, but also the importance of forbearance and conciliation. Of being able to bow to the past, but not be bound by it.

Of course, the relationship has not always been straightforward; nor has the record over the centuries been entirely benign. It is a sad and regrettable reality that through history our islands have experienced more than their fair share of heartache, turbulence and loss.

These events have touched us all, many of us personally, and are a painful legacy. We can never forget those who have died or been injured, and their families. To all those who have suffered as a consequence of our troubled past I extend my sincere thoughts and deep sympathy. With the benefit of historical hindsight we can all see things which we would wish had been done differently or not at all. But it is also true that no-one who looked to the future over the past centuries could have imagined the strength of the bonds that are now in place between the governments and the people of our two nations, the spirit of partnership that we now enjoy, and the lasting rapport between us. No-one here this evening could doubt that heartfelt desire of our two nations.

Sometimes formal speeches at state events can seem trite; unimportant. That could never be said to have been the case last night when two female heads of state, seated with the Taoiseach (Irish Prime Minister) and the British Prime Minister in the former seat of British government in Ireland made express their personal friendship, their mutual respect, and their respect for and regret about our shared history.

I am wary of over-stating the importance of these speeches or of this visit, but there was and is something powerful about the fact that the Queen has not chosen the easy route in this first visit through selecting a benign itinerary on a short trip. Rather she has gone to the difficult places, faced up to the reality of our history, and is staying for 4-days: an extremely long stay when one considers that Dublin is but an hour from London. There have been some protests, most of them peaceful and respectful but some of them involving violence against the Garda Síochána (police force), but the overwhelming feeling so far here that I can gauge is one of pride and a growing feeling of admiration for the Queen personally and of great affection for our President, whose hard work over the past 13 years built on the links initiated by President Mary Robinson when she was the first Irish president to meet the Queen back in 1996.

Anyone who wants to sense the Irish feeling on the visit will find the twitter feed, #queensvisit, an excellent source.