Preah Vihear All Over Again 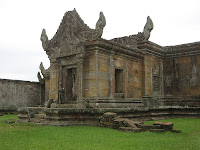 Violence is on the rise on the Thai-Cambodian border; more than 50,000 civilians have been displaced as the countries battle over ownership of the Preah Vihear temple. ICJ aficionados may recognize that name; in 1962, the Court decided that the "Temple of Preah Vihear was situated in territory under the sovereignty of Cambodia." Alas, that decision is still contested nearly 50 years later.
Though Preah Vihear was built in the 11th and 12th century by the Khmer kings who commissioned Angkor Wat, the ICJ decision did not explore Cambodia's cultural claim to the temple. Thailand argued to the ICJ that the border between the two nations should follow the watershed line of the Dangrek mountain range, pursuant to the directions given to a joint border demarcation commission constituted in 1904 by Siam and Cambodia's French colonial authorities. Cambodia rested its claim on a map created in 1907 by French officers working under the commission, in which the border deviated from the watershed to include Preah Vihear on Cambodian territory. The map was used without objection by Siamese authorities until 1954, when the French left Cambodia. In that year, Thai forces occupied Preah Vihear, and Cambodia filed a complaint with the ICJ in 1959. Despite Thai protests, Cambodia reclaimed the temple in 1963.
Fast-forward to 2008, when, at the request of Cambodia, UNESCO listed Preah Vihear as a World Heritage Site. The Thai People's Alliance for Democracy ("PAD"), colloquially known as the "yellow shirts", spotted a political opportunity, and held a six-month protest that was partially responsible for the downfall of the People's Power Party and the 2008 Thai political crisis. These protests gave rise to firefights along the border, and the temple, a major tourism destination, was closed.
In February of this year, Thai officials traveled to Cambodia to negotiate the dispute. The PAD again seized the chance to make political hay, holding protests to demand that the Thai government take a hard-line stance against an agreement with Cambodia. Fighting erupted again at the border.
The simmering dispute worsened last week, as officials held further talks on the Thai-Cambodian border. Though Indonesia has offered to send observers to the border under the auspices of ASEAN, the Thai military has refused. Some Thai opposition politicians claim that there is again a political motive for the gunfights, as the Thai military is trying to stir up trouble at the border to enable it to crack down on political dissenters. Moreover, Cambodian Prime Minister Hun Sen would like to see his old friend and former Thai Prime Minister Thaksin Shinawatra, ousted in a 2006 coup, back in power, which may impact Sen's willingness to negotiate reasonably with the current Thai government.
Whatever the cause, the human toll has been high. At least fifteen soldiers and one civilian have been killed. More than 50,000 civilians have been displaced on both sides of the border, and now depend on humanitarian aid in displaced persons camps.
Cambodia announced on Friday that it had asked the ICJ to review and clarify its 1962 decision, presumably to decide how much of the land beyond the Preah Vihear temple complex itself belongs to Cambodia. It remains to be seen whether a judicial ruling will be sufficient to defuse the political dimensions of the dispute.