We're pleased to announce that Ashgate Publishing Group in the United Kingdom is publishing a 3-volume Set, The Library of Essays on Sexuality and the Law (top right), this month. (photo credit) 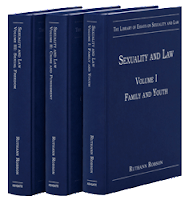 The set is edited by one of us, IntLawGrrls guest/alumna Ruthann Robson (below left), and is targeted at libraries throughout the world. (photo credit) It is very global in focus, de-emphasizing works from U.S. law journals, which tend to be readily available.
Featured:
► Volume I focuses on "Families and Youth." It includes an essay by the other of us, IntLawGrrl Kathleen A. Doty (below right). It's titled From Frette to E.B.: the European Court of Human Rights on gay and lesbian adoption. (prior post) Also featured are pieces on Dutch law, South African law, intersex youth in cases before the Colombia Constitutional Court, lawyering for queer youth, and issues for LGBT people.
► Volume II is entitled "Crime and Punishment," and begins with a discussion by openly gay Justice Michael Kirby (who retired in 2009 from Australia's High Court) about sodomy laws in Commonwealth nations. He argues that they were first imposed by colonial powers and now remain after colonial powers have abolished their own laws. This volume also includes the classic (but still not widely available)

essay The Myth of Lesbian Impunity, in which Louis Crompton demonstrated that lesbian sex was not historically immune from criminalization. Featured as well are essays on the criminalization of sex work, hate crimes with sexual minority victims, crimes in which the defendant's sexuality is used to prove the nonsexual crime, and issues of imprisonment and punishment.
► Volume III looks forward to "Sexual Freedom," even as it problematizes the concept. It considers hierarchies of sex in legal frameworks and hierarchies of nationalism in sexual-legal frameworks, asylum, gender identity, as well as legal education, judges, and their discourse and professionals within the legal system.
There are substantial introductions to each volume; they not only discuss the individual pieces 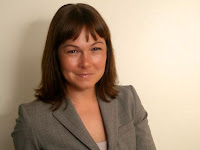 but also situate the work within the wider global field of Sexuality and Law.
We hope IntLawGrrls' readers will encourage their school libraries to purchase one or all of the volumes.
by Kathleen A. Doty + Ruthann Robson at 6:00 AM