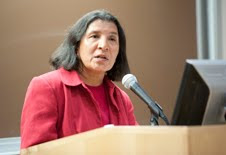 This year’s Northeastern University School of Law commencement speaker was United Nations Special Rapporteur on Violence Against Women, Rashida Manjoo (Northeastern University News photo, left). We’ve posted about her mandate and missions here and here.
Manjoo, and her husband Cassim, visited our community at a time of great opportunity and great challenge for newly-minted lawyers.
Yours truly, IntLawGrrl Hope Lewis, had the honor of reading the following citation as her Honorary Doctor of Laws was conferred:

Rashida Manjoo, gifted lawyer, visionary legal scholar, tireless advocate for women’s rights--
As Special Rapporteur on Violence Against Women for the United Nations Human Rights Council, you hold nations accountable for
meeting international standards that protect the human rights of women everywhere.
In your role at the International Criminal Court, as an advisor to the Women’s Initiatives for Gender Justice, you have applied your legal acumen, experience, compassion, and boundless energy to bring the
force of international law to securing women’s rights.
During South Africa’s transition from apartheid to democracy, you helped codify the rights of women in the South African constitution, and founded programs to ensure the efficacy of the nation’s
domestic-violence laws.

Looking out at our talented and committed class of 2011 as this remarkable and experienced "people's lawyer" was speaking, I thought back to my law school graduation 25 years ago. The mid-1980s was also a time of great opportunity and challenges for progressive lawyers.
25 Years of Challenges and Opportunities for International Law
No one knew what the future held. In that quarter century we’ve seen the fall of the Berlin Wall, the end of the Cold War; ethnic cleansing and genocide in the former Yugoslavia and Rwanda; the end of formal apartheid in South Africa; new jurisprudence on economic, social, and cultural rights from South Africa, India, Colombia, Venezuela, and Europe; the groundbreaking Beijing Fourth World Conference on Women; the rise of the internet as a human rights tool; large-scale terrorist attacks on civilians in Kenya, Tanzania, the United States, Bali, England, Russia, India, Pakistan, Iraq, and the Philippines; efforts to legitimize the arbitrary detention, torture, or abuse of suspects under the guise of counterterrorism measures; the creation of the UN Human Rights Council; UN Security Council Resolution 1325 on women and peace; the creation of UNWomen; the establishment of a permanent International Criminal Court; increasing scrutiny on violence against women in all its forms; a remarkable set of “people power” demonstrations in North Africa and the Middle East; the Responsibility to Protect; Security Council Resolution 1974; awful stories of hundreds of migrants dying in rickety boats off the coasts of the U.S., Spain, Italy, Libya, and Australia or in the deserts of North Africa and the United States; and the global collapse of “business as usual” in financial systems.
Each of these promising, or horrendous, events has involved the rule of law and the lawyers who interpret it.
Lawyering with Ubuntu
Special Rapporteur Manjoo, noting Northeastern’s commitment to social justice lawyering, reminded the audience about the great African philosophical concept of ubuntu. Roughly translated, the word means “I am what I am because of who we all are.” As Manjoo pointed out, the concept reflects the importance of a collective, as well as individual, sense of responsibility and care.
Many of our law students are going off to interpret trade agreements or the impact of multinational businesses on their workers and neighbors, to help prosecute international and domestic crimes, to work with international or regional organizations, or to battle human trafficking, public and private violence against women, poverty, or racism for community-based NGOs. Many will look for work in traditional law firms, corporate settings, or governmental departments.
All of them (and all of us) will do well to keep the concept of ubuntu in mind, no matter what the next 25 years bring.
Heartfelt congratulations to all the graduates, wherever they are in the world!
by Hope Lewis at 2:44 PM