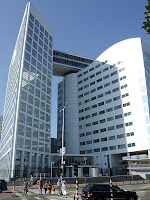 As anticipated in this post, international arrest warrants were requested today for the leader of Libya and 2 others.
In his statement announcing that it had presented evidence and made its request to a 3-judge Pre-Trial Chamber of the International Criminal Criminal Court (left), ICC Prosecutor Luis Moreno-Ocampo said:

The evidence shows that Muammar Gaddafi, personally, ordered attacks on unarmed Libyan civilians. His forces attacked Libyan civilians in their homes and in the public space, repressed demonstrations with live ammunition, used heavy artillery against participants in funeral processions, and placed snipers to kill those leaving mosques after the prayers.


Also alleged to have committed crimes against humanity in Libya since mid-February are 2 members of what Moreno-Ocampo's statement called the "inner circle" on which Gaddafi relies "to implement a systematic policy of suppressing any challenge to his authority." (credit for 2006 photo) The 2 are:
► Saif al-Islam al-Gaddafi, the Libyan leader's son who has been serving as a spokesperson for the government, and who "threatened 'rivers of blood'" when conflict erupted in late February; and
► Abdullah al-Sanousi, the head of Libyan intelligence.
Even as it awaits the Pre-Trial Chamber decision on whether to issue these warrants, Moreno-Ocampo said that the Office of the Prosecution will continue investigating the situation in Libya, a matter opened in response to a U.N. Security Council referral. The Prosecutor mentioned areas of particular concern; specifically allegations of:
► "rapes committed in Libya";
► "attacks against sub-Saharan Africans wrongly perceived to be mercenaries"; and
► "war crimes committed by different parties during the armed conflict that started towards the end of February."
Forthcoming in June will be the report of the inquiry commission appointed by the U.N. Human Rights Council and led by our colleague M. Cherif Bassiouni.