(Delighted to welcome back alumna Lisa Laplante, who lived many years in Peru as both a transitional justuce advocate and researcher (see here), and who contributes this guest post)

Peruvians elected their 94th president earlier this month. Anyone following the election probably could not miss the fantastical García Márquez-esque drama that unfolded before the stunned electorate. Upon the segunda vuelta, or second run-off, the citizenry had to choose between:
► Ollanta Humala (right), a former army captain once prosecuted for torture (photo credit), or
► Keiko Fujimori (below left), the debutante daughter of a former authoritarian President -- a father now in prison for human rights abuses. (photo credit)
Those in the human rights community, myself included, felt great dismay at the rising popularity of Keiko, who ran on a ticket that defended the policies of her father Alberto Fujimori. As IntLawGrrls have posted, Fujimori senior became a fugitive in 2000 after the revelation of the vladivideos -- tapes made by his closest advisor, Vladimiro Montesinos, showing him bribing hundreds of powerful elites, including media moguls, judges, and politicians. Despite Peru’s attempt to extradite, for years Fujimori enjoyed a comfortable life in Japan, where he hosted a weekly radio program to keep in communication with his supporters. Keiko had served as his First Lady when her parents divorced, and 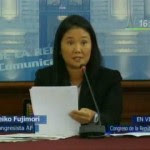 then in 2005 she became a member of Peru's Congress. She'd always staunchly defended her father, and she rallied the Fujimoristas. These loyal followers contend that the elder Fujimori ended terrorism in Peru, when in reality it was years of police detective work preceding his administration that led to the 1992 arrests of the leaders of the insurgent groups. They also say that he instituted neoliberal reforms that "saved" the economy from hyperinflation blamed on his predecessor, Alan García, who'd served from 1985 to 1990.
Yet even in the heyday of Fujimori’s administration, local human rights activists contested his celebrated image by producing evidence that revealed his underhanded ways. Their strategy of submitting claims to the regional system resulted in emblematic judgments: the Inter-American Court of Human Rights declared that Fujimori’s antiterrorism laws had violated the American Convention on Human Rights.
Eventually, this tireless struggle would be validated by the work of the Truth and Reconciliation Commission established soon after Fujimori’s departure. The truth commissions' Final Report, published in 2003, included a harsh condemnation of Fujimori’s repressive regime and the systematic human rights violations caused by his "war on terror." In particular, it provided damning evidence of:
► Massacres carried out by a paramilitary group formed with Fujimori’s approval, as well as the
► Imprisonment of thousands of innocent people under his draconian anti-terrorism laws.
Not incidentally, Fujimori stole millions of dollars while carrying out his Machiavellian scheme.
The Peruvian truth commission recommended criminal investigations of the crimes attributed to the Fujimori regime, and even handed over files to the Attorney General’s office. Yet Fujimori enjoyed safe haven in Japan until 2005, when he suddenly decided to fly back to South America in anticipation of Peru’s upcoming presidential elections.
This audacious move revealed the degree to which Fujimori still believed in an anachronistic time when former heads of states enjoyed complete immunity (a.k.a. impunity). Quite naively, he underestimated the growing global trend towards accountability. Indeed, during his stop-over in Chile, Fujimori was promptly arrested and, eventually, extradited to stand trial in Peru.
In my own observation of Fujimori’s criminal trial as part of a monitoring project I directed with the support of the Open Society Institute, I observed how Fujimori’s trial only seemed to deepen the division between Peruvians.
To arrive at the courthouse, I had to walk along a half-mile of a blocked-off dirt road lined by large warehouses. Fujimoristas blasted cheer songs over large megaphones and brandished placards that read: "Fujimori es inocente."
At the same time, the human rights community organized colorful rallies with theatrical life-sized puppets and music in support of this historical trial, which made Peru one of the first countries to use wholly domestic courts to prosecute a former head of state for human rights abuses. In April 2009, Fujimori was convicted and ordered to serve twenty-five years in a custom-made penitentiary.
Safely behind bars, Fujimori no longer posed a threat to Peru’s democracy -- or so it seemed.
The ink of the judgment against her father was barely dry before Keiko announced she would run for president. She promised to pardon her father if elected. As I recently explored in my article “The Domestication of International Criminal Law: A Proposal for Expanding the International Criminal Court’s Sphere of Influence,” this threat was not empty, and it revealed a bittersweet paradox of the decentralization of international criminal law.
In paying homage to the principles of legality, the Peruvian judges faithfully protected the due process rights of the defendant by only considering those crimes codified at the time the allegedly illegal acts took place. Eventually, they only convicted Fujimori for the ordinary offenses of murder and kid 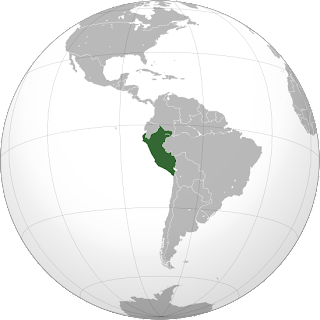 napping. Despite viewing the underlying offenses as offenses against humanity, the Peruvian justices decided against charging Fujimori with that international crime -- event though amicus briefs from foreign and national law schools had contended that customary law permitted such a charge. Ultimately, the judges sought to avoid any ex post facto issues that might call into question the legitimacy of the proceedings. (credit for map showing Peru in green)
Even if the issue of Fujimori’s pardon is a less urgent matter -- at least until the next elections when Keiko will undoubtedly run again -- it raises interesting issues.
Scholars argue that pardons can never be granted for crimes against humanity, although as far as I know there has not yet been a case to test this assertion. But certainly presidents exercise their right to pardon criminals convicted of ordinary offenses on a regular basis. Thus, Peru’s experience shows that if a population votes for a certain candidate, it may also hold the power to unravel any justice gained as part of a transitional justice undertaking.
For that reason, I watched the polls anxiously, wondering if the Peruvian population would essentially vote for impunity.
I experienced deep relief when Keiko conceded defeat -- although she only trailed in the ballots by a 2% margin. But a second later, I wondered what new black-magic genre of drama awaited Peru, given that Humala lost his first bid for presidency in 2006 because of the same type of panic reaction. Back then, Peruvians worried about Humala’s failed military revolt in 2000, the spate of legal claims of torture, and his populist leanings that tied him to Venezuelan President Hugo Chávez. Then as now, voters were backed into a corner, given that the other candidate was Alan García, who, in an earlier stint as Peru's President, nearly destroyed the economy and led an anti-terrorism campaign that resulted in the highest rates of disappearances in the world. At that time, García had appeared to be “the least bad.” Yet his election caused me to wonder what progress really had been gained by Peru's truth commission.
Fast forward five years.
This month Peruvians found Humala, who is set to take office at the end of July, to be the "least evil" option. Notably, the majority of those who voted for him did so in protest against an economic status quo that has kept them stuck in the same socio-economic inequalities (despite Peru’s booming economy) that, in the view of the truth commission, helped to ignite the internal armed conflict thirty years ago, when insurgent groups promised to reverse social injustices. In similar fashion, populist candidates in Peru often promise to finally bring equality to the most marginalized Peruvians: the working class, campesinos and indigenous peoples. In fact, this same population voted for Fujimori in 1990, when he was a virtual political unknown, because he promised to save them from economic hardship.
And, well, we know how that unhappy tale ended…