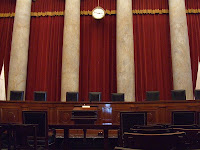 (My thanks to IntLawGrrls for the opportunity to contribute this guest post, an excerpt of my article "In Front of the Burgundy Curtain: The Top Ten Lessons I’ve Learned About Advocacy Before the Nation’s Highest Court," 14 Green Bag 2d 9 (2010))


I’ve learned that women have a harder time than men being successful advocating and arguing before the Supreme Court. Professor Richard Lazarus from Georgetown University has defined the Supreme Court bar as the

'elite private sector group of attorneys who are dominating advocacy before the Court.'

This group is mostly men. In other words, men thus are overwhelmingly the most successful, well known, and repeat advocates before the Court. Men also unquestionably dominate the lawyers representing corporations appearing before the Court. With very limited exceptions, the women I see arguing before the Court are public interest lawyers, public defenders represented the criminally convicted, or government lawyers. Translation: women are doing the same work but for less pay. 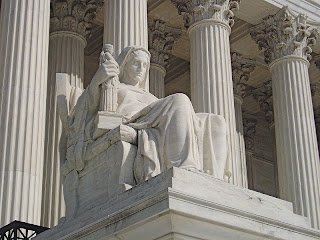 What’s behind this gender discrepancy? The Supreme Court (no less than the highest levels of the other branches of government) has historically been all male. There have 4 women out of 112 Justices. As noted in numerous IntLawGrrls posts available here, up until recently Justice Ruth Bader Ginsburg was the lone female and even today, the men outnumber the women 2 to 1.
Some of the blame also lies in the historical male dominance in the Solicitor General’s Office.
By way of background, the lawyers from the Solicitor General’s Office regularly argue before the Court and thus have the unique opportunity to gain expertise in this area. By contrast, most other appellate lawyers will never argue in the Supreme Court. Thus, this elite Supreme Court bar largely consists of men who worked in the Solicitor General’s office.
There has never been a female solicitor general before Elena Kagan, and she was Solicitor General only for the blink of an eye before being nominated to the Supreme Court. Similarly, in my 13 years there, I only worked with 1-3 other women at any give time and, shockingly, there was only 1 female supervisor for a very short time during those 13 years. The Office now has the most women ever: 6.
But I do not think those structural barriers totally explain why women have not been as successful as men. In my view, a lot of the problem results from the fact that litigation requires a war-like mentality. The Courtroom is a battlefield, and oral argument requires a fair amount of verbal jousting and sparring with the Justices. Male lawyers generally are more fearless in this type of verbal battle, even though from my experience many of those men are obviously clueless that they have no talent. (credit for Supreme Court photos)
I’ve heard countless women – but not a single man – say to me:

'I could never stand up before the Supreme Court; it would be way too stressful.'

But I’ve heard countless men, and very few women, say to me:

'I would love to argue in front of the Court; that would be so exciting.'

That anecdotal evidence is consistent with my experience from kindergarten through twelfth grade where, with one exception, I saw only boys getting into fist fights.
Other attributes that hold women advocates back relate to other female stereotypes, however undeserved those stereotypes may be and even though these same attributes also hold male advocates back. As discussed, what’s effective before the Court is the projection of strength, confidence, and control. What does not work is showing hesitation or insecurity. A whiny voice is also real turn off. Moreover, an emotional tone does not work, and showing compassion is typically a big “no-no.” And while I’ve seen men effectively respond to a Justice’s question by saying “As I tell my kids,” I’ve never seen a woman use that rhetoric. Projecting motherhood does not sell as an advocate.