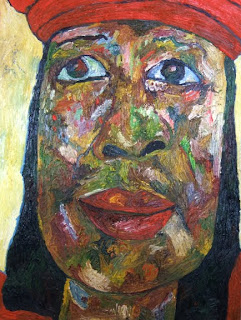 Senegal has been contemplating a trial of ex-President Hissène Habré. Indeed, we recently blogged about a series of meetings being held with the African Union on the logistics of a quasi-international special tribunal to stage such a trial. We’ve just learned from Human Rights Watch that Senegal has withdrawn from the meetings, signaling – in the words of Jacqueline Moudeina, a human rights activist with the Chadian Association for the Promotion and Defense of Human Rights (ATPDH) – that


The idea that Senegal would try Habré was just an illusion.

The portrait at right is of Moudeina and is available through Arts for Amnesty International.

December 1990 - President Hissène Habré of Chad is overthrown and arrives in Senegal.

February 3, 2000 - A Senegalese judge, Demba Kandji, indicts Habré as an accomplice to torture, barbarous acts and crimes against humanity.

June 30, 2000 - The Superior Council of the Magistracy, presided over by President Abdoulaye Wade, transfers Judge Kandji, removing him from the Habré investigation, and gives the president of the Dakar Appeals Court a promotion.

July 4, 2000 - The Dakar Appeals Court rules that Senegalese courts cannot pursue the charges because the crimes were not committed in Senegal. The United Nations special rapporteurs on the independence of judges and lawyers and on torture criticize the decision and the circumstances under which it was issued. The victims appeal.

March 20, 2001 - Senegal's highest court rules that Habré cannot stand trial because his alleged crimes were not committed in Senegal.

April 23, 2001 - The United Nations Committee against Torture (CAT) calls on Senegal not to allow Habré to leave the country.

September 27, 2001 - President Wade agrees to hold Habré in Senegal pending an extradition request. "If a country that can organize a fair trial wants him - they speak of Belgium- I wouldn't see any obstacle."

September 19, 2005 - After a four-year investigation, including a mission to Chad, a Belgian judge issues an international arrest warrant for Habré for crimes against humanity, war crimes and torture. Belgium requests his extradition from Senegal.

November 24, 2005 - The state prosecutor recommends that the Dakar Court of Appeals declare itself without jurisdiction to rule on the extradition request.

November 25, 2005 - The Dakar Court of Appeals rules that it has no jurisdiction to rule on the extradition request. Habré is released.

November 27, 2005 - Senegal asks the African Union summit to indicate "the jurisdiction that is competent to try this matter."

July 2, 2006 - The African Union, on the report of the CEAJ, asks Senegal to prosecute Habré "on behalf of Africa." President Wade agrees to the request.

January 31, 2007 - The Senegalese National Assembly adopts a law that allows Senegalese courts to prosecute cases of genocide, crimes against humanity, war crimes and torture, even when committed outside of Senegal. It later amends its constitution.

July 2007 - The Presidents of Switzerland and France are the first to promise assistance to Senegal for the conduct of the investigation and trial.

February 19, 2009 - Belgium asks the International Court of Justice (ICJ) to order Senegal to prosecute or extradite Habré. On May 28, the ICJ accepts Senegal's formal pledge not to allow Habré to leave Senegal pending its final judgment.

2008 - 2010 - Senegal refuses to move forward until it receives full funding for the trial, and President Wade threatens to expel Habré unless funding arrives. The European Union and the African Union send numerous delegations to negotiate with Senegal. Senegal first seeks €66 million, then €27 million, and finally agrees to an €8.6 million budget.

On May 28, the ICJ accepts Senegal's formal pledge not to allow Habré to leave Senegal pending its final judgment.

November 18, 2010 - The Court of Justice of the Economic Community of West African States (ECOWAS) rules that Senegal must try Habré through a "special or ad hoc procedure of an international character."

November 24, 2010 - A donors' roundtable results in pledges of €8.6 million, fully covering the estimated costs of all the proceedings. Senegal's justice minister says the meeting was the "completion of the long process of preparation leading up to the actual start of trial."

December 10, 2010 - President Wade declares that "The African Union must take its case back... I've had enough of it at this point... I am going to get rid of him, full stop."

January 12, 2011 - The United Nations Committee against Torture responds to Wade's statement by reminding Senegal of its "obligation" to prosecute or extradite Habré.

January 13, 2011 - President Wade rejects an AU plan to try Habré before a Cambodia-style court with Senegalese and African judges.

January 31, 2011 - The African Union calls for the "expeditious" start to Habré's trial based on the ECOWAS decision.

February 4, 2011 - President Wade says: "Now, the chairman of the African Union Commission [says] we have to create a new jurisdiction, based on I-don't-know-what principle, to try Hissène Habré. I said stop. For me, it's over. I am no longer seized of this case. I am giving him back to the African Union."

March 24, 2011 - Senegal and the AU announce agreement on an "Ad hoc International Court" to try Habré and agree to meet in April to finalize the Statute and Rules of the Court.