(Delighted to welcome back IntLawGrrls guest/alumna Felice Gaer, who contributes this tribute)

Elena Bonner was a 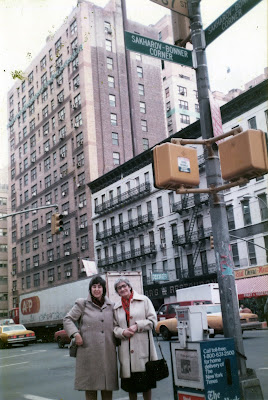 remarkable woman and human rights defender, widely eulogized in the week since she died at 88 following heart surgery in Massachusetts. Bonner was, since 1972 the wife and after 1989, the widow of famed Soviet Nobel Peace Prize Laureate Andrei D. Sakharov – the moral giant who stood for human rights, peace and telling the truth.
Elena was herself a major public figure, as well as a demanding mother and doting grandmother – and a wonderful interlocutor, and a great role model. Her loss is huge.
She had many years of activism as well as repeated bouts of illness and infirmity. But it was her ability to rise again and again from infirmity to activism, to speak up and demand change, to exhibit courage when others were wilting from the repression that was directed against the tiny dissident/human rights community, for which we will always remember her. And of course, for the many institutions she created and preserved, so the message and moral views of Andrei Sakharov will live on in Russia and beyond.
I first met Elena Bonner when she came to New York for heart surgery in 1986 – we even took this photo together, standing on Sakharov-Bonner Corner, just down the block from the Soviet Mission to the United Nations. Before and in the years in between, I helped carry out the rapid-fire demands and requests that Mrs. Bonner conveyed when she was able to get through on a rare, closely controlled international phone line out of Russia. Her requests, frankly, were endless. Or so it seemed. When I learned that her eye trouble stemmed from being wounded at the front in World War Two, I thought – how ironic – she could have been a great General! She understood the need to combine strategy with action – to fight on several fronts, and never to give up.
In a New Yorker tribute, David Remnick recalls how Bonner was slandered by Soviet spokesmen as a “sexual brigand” and “predatory Jew” who somehow led Sakharov astray, but he reflects on how she served as Sakharov’s protector, his ‘lion at the gate’ – and that she was “unafraid” and resilient.
Former New York Times reporter Serge Schmemann simply describes her as “formidable,” “imposing”, “peremptory” and a “sergeant –major.”
Let’s be clear: Elena Bonner was not a minor player, not a “sergeant-major”-- she was courageous, demanding, and effective. And that is why she was one of the great human rights defenders of our time.
She was well aware of who she was and, of course, of the worldwide renown which her husband Sakharov had gained since his famous 1968 essay on human rights, “Thoughts on Progress, Peaceful Coexistence, and Intellectual Freedom."
I recall vividly visiting her in Newton, Massachusetts, in 1990 – about 6 months after Sakharov's untimely death, but well before the collapse of the Soviet Union had even been contemplated. It was the day of the Wellesley College graduation, just one town away, and the Soviet 1st Lady Raisa Gorbachev was the commencement speaker alongside U.S. 1st Lady Barbara Bush. There was a media frenzy around this – the first time that Mrs. Gorbachev, who was accompanying her husband, President Mikhail Gorbachev, on a state visit, was given such a platform in the United States.
When I arrived, Elena’s first question was, “What do you think of Raisa’s planned speech?”
I said I thought it was disgraceful, since the only reason Raisa Gorbachev was asked to be the commencement speaker at Wellesley was because she was the wife of a famous man.
Well, Elena responded immediately, “You could say the same thing about me..."
When I recovered my balance, I protested to the contrary – all the things she had done herself, the causes she championed, the organizations like the Moscow Helsinki Group and a fund for the children of political prisoner that she founded, among others. She was no mere reflection of a powerful man. 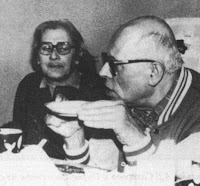 Still, Elena insisted that her ability to be heard – not to speak, but to be heard – depended in large measure on having been the wife of Andrei Sakharov, and that was now, well, a thing of the past. She remained the widow of Sakharov, but on her own, would anyone pay attention?
Bonner was devoted to Sakharov and his ideals, but he was just as devoted to her. (credit for photo of Sakharov and Bonner)
In the early 1980s, Sakharov was snatched on a Moscow street and exiled (we later learned he was in the Soviet city of Gorky), without charges or trial, and kept from communication with outsiders – both scientific colleagues and all others. Bonner became his sole link with the outside world, until she, too, was “detained”, tried, and sentenced to internal exile in Gorky. Sakharov warned that Bonner was at greater risk than himself:

‘This article is being taken to Moscow by my wife, my constant helper, who shares my exile and willingly takes upon herself the heavy burdens of traveling back and forth, handling my communications with the outside world, coping with the growing hatred of the KGB. Earlier she withstood the poison of slander and insinuation, focused more on her than on me. The fact that I am Russian and my wife is half-Jewish has proved useful for the purposes of the KGB.
‘Every time my wife leaves, I do not know whether she will be allowed to travel without hindrance and to return safely. My wife, although not formally under detention, is in greater danger than I am. I urge those who speak out on my behalf to keep this in mind. It is impossible to foresee what awaits us. Our only protection is the spotlight of public attention on our fate by friends around the world.’

After Sakharov’s death, Bonner spoke often, and was commonly controversial, challenging her hosts and looking to the future. She expressed concern about the direction of the modern human rights movement – concerned that too many had forgotten Sakharov and forgotten Russia. 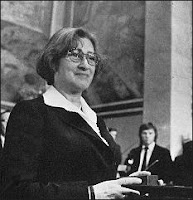 She asked pointedly on her 2009 return to Oslo, where she had received Sakharov's Nobel Peace Prize in 1975 (left) (credit), about the reason for the silence of the world human rights community when it came to the release of Gilad Shalit, an Israeli soldier abducted in 2006 by Hamas fighters and held incommunicado since then. Why doesn’t the treatment of this prisoner of war trouble you, she asked human rights defenders, in the same way as the fate of the GTMO prisoners? You fought over that and got results. She called for Shalit’s release, and remarked that the only reason she could find for the way the NGO community ignored him was that he is a Jew. Bonner used the occasion to remark that Norwegian views on Israel had evolved strangely. In so doing, she crisply spoke truth to power, now calling herself “a public figure and member of the movement for democratic change.”
Her views were not always negative, as her remarks to the Institute that I direct indicates:

‘In the early ’70s, the Jacob Blaustein Institute for the Advancement of Human Rights (JBI) was one of the very few, if not the only one, among the Jewish organizations concerned with the general state of human rights in the Soviet Union, not limiting it to the issues of Jewish emigration, understanding that an injustice anywhere on the face of this earth is a threat to justice everywhere. This recognition drew common cause with the Soviet movement for democratic change in the 70s, lending it the authority and credibility much needed in what was then a climate of official malice, slander, and persecution. …
‘Among the people closely associated with JBI are those I am happy to call my friends. They have shared the same beliefs with me and Andrei Sakharov, they have stood up for us when we were in danger, they helped us in our efforts to make human rights ideals a reality. ...
‘It is hard to imagine or to remember today that these words 'human rights' were not always the accepted, respectable, almost commonplace words we take them for now. Yet it is true that they were the dangerous, impertinent and disturbing words many a state head could not bear hearing! It is thanks to individuals … and institutions like the JBI, who had the courage to be impertinent, that today it is more and more difficult for the rights-violating governments to challenge the universality of human rights and to ignore human rights concerns. This indeed is a sign of how much can be done by commitment and humanity to safeguard human life and dignity.'

Let us all remember to honor Elena Bonner’s memory by being impertinent, by working to defend human rights as she did – relentlessly.