How to speed up ICC proceedings 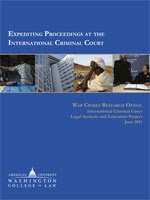 The War Crimes Research Office at American University Washington College of Law recently launched the latest in its series of reports on the International Criminal Court at the Colombian Embassy in the Netherlands, at an event co-hosted by the Group of Friends of the ICC. The report, Expediting Proceedings at the International Criminal Court, examines means of avoiding delays in proceedings before the ICC.
In its less than one decade of existence, the ICC has achieved a great deal, opening formal investigations into six situations involving some of the most serious atrocities that have occurred since the birth of the Court in 2002 and initiating cases against a number of the individuals believed to bear the greatest responsibility for those atrocities. However, nearly ten years after coming into being, the ICC has yet to complete a single trial, raising concerns among States Parties to the Rome Statute and others regarding the effective functioning of the Court. Thus, while recognizing that the ICC is still a young institution faced with a variety of novel substantive and procedural challenges, the aim of the report is to identify areas of unnecessary delays in proceedings currently before the Court that are likely to arise again, and suggest ways in which such delays may be avoided in the future.
The analysis is divided into three sections:
► Delays arising at the pre-trial stage of proceedings, referring to proceedings conducted before the Court’s Pre-Trial Chambers;
► Delays arising after a case has been transferred to the Trial Chamber; and
► Delays cutting across both at the Pre-Trial and Trial stages of proceedings.

Pre-Trial Stage
The report addresses:
► Delays in the issuance of arrest warrants/summonses to appear.
The Pre-Trial Chambers have in several cases taken more than two months to respond to applications for a warrant of arrest or summons to appear under Article 58 of the Rome Statute, and in only two cases has a Pre-Trial Chamber responded to an Article 58 application in less than one month. By contrast, the ICTY, the ICTR, and the SCSL have regularly issued arrest warrants in a matter of days, rather than weeks or months, even in cases against senior leaders.
► Delays in the confirmation of charges process.
Before a suspect is committed to trial, a Pre-Trial Chamber of the ICC must hold a hearing to confirm the charges on which the Prosecutor intends to seek trial. As of the writing of the report, the ICC has concluded confirmation proceedings in five cases and, in each case, the confirmation process has taken anywhere from 8 to 14 months, even though the Chamber need only establish substantial grounds to believe the suspect is responsible for the crimes charged.
►Furthermore, cases are not actually “trial ready” when they move from the Pre-Trial Chamber to the Trial Chamber. Indeed, the period of time between the transfer of a case to a Trial Chamber and the actual first day of trial in that case has ranged between 13 and 22 months. Clearly the cases are not “trial ready” when they reach the Trial Chamber.

Trial Stage
On this, the report addresses:
► Delays related to the number and assignment of trial judges.
There are currently eight judges assigned to the Trial Division of the ICC. Because each Trial Chamber is composed of three judges, in order to run three trials simultaneously, judges either need to be assigned to more than one active case at a time or a judge from the Pre-Trial Division needs to be temporarily assigned to the Trial Division. Yet there are drawbacks to these options. For instance, when the Bemba Trial Chamber was initially constituted, two thirds of the judges assigned to the Bemba Trial Chamber were already serving on the Lubanga Trial Chamber. Presumably, the idea was that the Lubanga trial would conclude well in advance of the start of the Bemba trial, and thus the judges would be able to serve on both trials. However, as the third chart above suggests, even before trial commences, judges assigned to a Trial Chamber have been called upon to render an extensive number of decisions and participate in a number of status conferences. Because the Rome Statute requires the functions of the Trial Chamber to be carried out by all 3 judges, a judge sitting on two Trial Chambers can only dedicate him or herself to one or the other, meaning that the trial proceedings in the Lubanga case and the pre-trial preparation in the Bemba case were likely both adversely affected by the overlap in the makeup of the Chambers. Additionally, as it turned out, the Lubanga trial was nowhere near conclusion by the time the Bemba trial was due to commence, meaning that the two judges who were serving on the Lubanga Trial Chamber had to be replaced for purposes of the Bemba trial. This change in the composition of the bench was one of the reasons that the start of the Bemba trial, scheduled to take place in July 2010, was delayed and only began in November of that year.
► Delays related to the requirement, found in Articles 39 and 74 of the Rome Statute, that.all three judges carry out the functions of the Trial Chamber and that all three be "present" at each stage of the trial and throughout their deliberations.
Obviously, delays are likely where one or more judges are assigned to more than one active case at a time. However, the requirement that all Trial Chamber functions be carried out by three judges may also be a source of undue delay even where there is no overlap in the composition of the various Trial Chambers. Indeed, this provision, read literally, requires all three judges to be involved in each status conference and in every order and decision issued by the Chamber – including coordinating communication between the parties and setting deadlines. Given the volume of work in the lead up to trial, this seems both unnecessary and inefficient. Additionally, the requirement that all Trial Chamber functions be carried out by three judges raises problems when one judge is unexpectedly unavailable, for instance, due to sickness or a family emergency.
► Delays related to the amount of time taken by live testimony.
It is true that the Rome Statute expresses a preference for evidence to be presented through a process of in-court direct- and cross-examination of witnesses. However, it is not necessarily true that all evidence needs to be presented via in-court examination. Indeed, in the context of atrocity trials, a significant amount of the evidence relates to matters other than the conduct of the accused in relation to the crime charged, such as background events, jurisdictional prerequisites, impact on victims, and factors relevant to sentencing. Furthermore, the length of time taken by live witness testimony at the ICC has arguably been exacerbated by a number of factors. For instance, the Trial Chambers’ prohibition on witness proofing has arguably prolonged witness testimony, as witnesses have had to be recalled after recanting testimony or have had to take a break from giving testimony after suffering an emotional breakdown. Similarly, the ban on leading questions – which, as a practical matter, is what has happened in the Bemba case – has also likely contributed to delays, as leading questions are often useful in “bringing witnesses to the point,” particularly on cross-examination or with respect to non-contentious issues.

Cross-Cutting Issues of Delay
Issues the report discusses regarding delays that cut across both the Pre-Trial and Trial stages of proceedings iclude:
► Delays in the interlocutory appellate process.
Delays in this area have occurred for several reasons. First, the Pre-Trial or Trial Chamber responsible for the initial impugned decision sometimes causes delays by waiting a substantial period of time before issuing rulings on whether to grant a party’s request to obtain interlocutory appeal. Second, the Appeals Chamber has regularly taken several months to render judgments on those issues that reach it, even though in many cases the proceedings below have been formally or effectively halted pending the judgment. Finally, although the Appeals Chamber regularly takes multiple months to rule on an interlocutory appeal, the resulting judgment is often brief, providing limited guidance to the parties and lower chambers of the Court.
► Delays relating to the process of disclosure.
Late disclosure of material by the Prosecution to the Defense has been one of the principal causes of delay at the ICC. Based on a review of the jurisprudence, the delays have arisen for several reasons. Among them is the fact that the Prosecution has had to postpone the disclosure of evidence containing sensitive information until any at-risk witnesses have been accepted into the ICC’s Protection Programme or the Chamber has approved an application from the Prosecution to redact confidential information from the evidence, both of which can be time-consuming processes. With respect to the Court’s Protection Programme, it takes an average of two to three months from the moment the Prosecution requests that a witness be included in the Programme until the witness is actually relocated. As the Pre-Trial Chamber explained in the Katanga case, this period increases to five or six months when the Victim Witness Unit is faced with processing dozens of requests in relation to the various cases before the Court. Notably, the Prosecution has applied for a significant number of its witnesses to be admitted into the ICCPP in each of the cases before the ICC. 20 of the Prosecution’s 28 witnesses were admitted into the ICC’s Protection Programme in the Lubanga case; and 19 of the Prosecution’s 25 fact witnesses were admitted into the Programme in the Katanga case. Similarly, decisions on requests for redactions can take weeks, if not, months.

Recommendations
In each section, the report proposes a series of recommendations aimed at expediting the proceedings. Some of the solutions proposed will require an amendment to the Rome Statute or the ICC Rules of Procedure and Evidence, both of which require adoption by a two-thirds majority of the Assembly of States Parties (ASP). Solutions that call for additional resources would also require action by the ASP. Other solutions could be accomplished by an amendment to the Regulations of the Court, which would require a favorable vote by a majority of the judges serving at the time of the amendment. The judges could also enact certain of the recommendations simply by adopting a different interpretation of the Rome Statute, Rules, or Regulations, or by taking a different procedural approach. Finally, some of the proposed solutions call upon the Office of the Prosecutor or the Registry to adopt certain changes in their practices.
The full report is available here.