In an 8-0 decision authored by Justice Ginsburg (with Justice Sotomayor recusing herself), the U.S. Supreme Court held that “the Clean Air Act and the EPA actions it authorizes displace any federal common law right to seek abatement of carbon-dioxide emissions from fossil-fuel fired power plants.” (photo credit)
The Court made clear that this displacement did not hinge on EPA deciding to regulate greenhouse gas emissions: 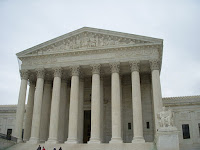 The critical point is that Congress delegated to EPA the decision whether and how to regulate carbon-dioxide emissions from power plants; the delegation is what displaces federal common law. Indeed, were EPA to decline to regulate carbon-dioxide emissions altogether at the conclusion of its ongoing §7411 rulemaking, federal courts would have no warrant to employ the federal common law of nuisance to upset the agency determination.
….
If the plaintiffs in this case are dissatisfied with the outcome of the EPA’s forthcoming rulemaking, their resource under federal law is to seek Court of Appeals review, and ultimately, to petition for certiorari in the Court.

While shutting down federal nuisance law actions (except, as Dan Farber has blogged, in the circumstance in which Congress votes to repeal EPA jurisdiction), the Court reinforced that climate change litigation can continue to play an important regulatory role. First, the opinion, before reaching the merits, states that 4 votes (without Justice Sotomayor weighing in) remain in support of Massachusetts v. EPA’s approach to standing and that “no other threshold obstacle bars review,” which indicates that they do not view the political question doctrine as a barrier. Second, the opinion highlights the appropriateness of regulatory actions under the Clean Air Act. Third, the opinion does not reach the question of whether a federal nuisance action would be allowed if Congress decided that EPA could no longer regulate greenhouse gas emissions or whether state law nuisance actions are preempted. The opinion thus limits federal common law as a “parallel track” but maintains future possibilities for courts to be involved in assessing federal climate change regulation and state law nuisance actions. It also leaves untouched the many actions, generally brought in state courts, challenging power plants (especially coal-fired ones) based on their greenhouse gas emissions.

This has been cross-posted on the SaltLaw Blog and Environmental Law Prof Blog.