(Look On! takes occasional note of noteworthy films and stage productions.)
Though Egypt loosened its blockade of Gaza last weekend with the opening of the Rafah Crossing, the Strip continues to suffer under Israel's tight control over its remaining borders. On Tuesday, Gisha, an Israeli non-profit (about which we've blogged here) aiming to protect Palestinians' freedom of movement, released a short animated film entitled "Gaza Reels". The film seeks to unsettle common perceptions about Israel's disengagement from Gaza and the closure of the Strip. Specifically, in the words of Sari Bashi, the executive director of Gisha, "Gaza Reels" 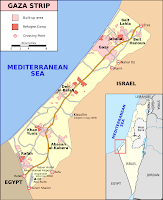 challenges the commonly held belief that Israel no longer exercises control over Gaza and does not bear responsibility for what goes on there – an opinion voiced ever more strongly since the opening of Rafah. The film also looks at the way in which the ongoing closure policy mainly hurts the civilian population of the Gaza Strip.

The film, which clocks in at 2 1/2 minutes, was created by animator Anna Shevchenko in the style of the "Geva newsreels" shown in Israeli movie theaters in the 1950s and 1960s. "Gaza Reels" will be distributed online through social media networks in an effort to "initiate an informed public discussion of Israel's policy towards Gaza." Gisha has accompanied the film with a "cheat sheet" explaining the humanitarian impact of the Gaza closure.