Not a moment too soon 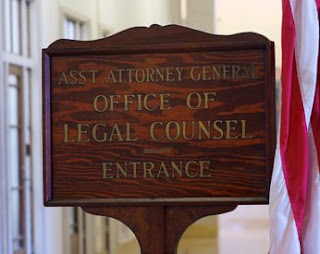 OLC finally has a leader.
OLC stands for Office of Legal Counsel, an arm of the U.S. Department of Justice responsible for giving Executive Branch officials legal opinions on contemplated action. (photo credit) It's an acronym that IntLawGrrls readers will recall for at least 2 reasons:
► Out of this office came the some of the most notorious documents of the George W. Bush Administration, the so-called torture memos, which purported to construct a legal cover for the harshest methods of interrogation and detention.
► Even before his own inauguration, then-President-elect Barack Obama nominated Indiana Law Professor Dawn Johnsen, whose Bush-era critiques of the torture memos included an IntlawGrrls guest post. But her confirmation battle was nasty, brutish, and long. It ended with Dawn's withdrawal from consideration in April 2010.
At a Northwestern Law symposium in May, Dawn urged the confirmation of her successor nominee, Virginia Seitz (below left). (photo credit) The Sidley & Austin partner had been nominated the 1st week of this year, but her confirmation process too seemed stalled. In a vein similar to an op-ed she'd written the year before, Dawn stressed the importance of the work of OLC. Among the issues on which the office gave advice, she noted, were military targeting and others related to the laws of war.

Dawn's comments proved prescient in the middle of this month: The New York Times reported that the administration's top lawyers had divided on whether U.S. military involvement in Libya constitutes "hostilities" that require congressional approval pursuant to the War Powers Act.
Many commentators have pondered the personalities in that debate, mulled who took what side. (See, for example, Yale Law Professor Bruce Ackerman's criticism. State Department Legal Adviser Harold Hongju Koh testified on the matter before a Senate committee yesterday.)
Particularly noteworthy to this 'Grrl was that OLC had lost the President's ear. Times reporter Charlie Savage explained:

Traditionally, the Office of Legal Counsel solicits views from different agencies and then decides what the best interpretation of the law is. The attorney general or the president can overrule its views, but rarely do.

In the Libya war powers instance, however, Obama did overrule OLC's views -- as delivered through an acting head. One can only wonder whether those views would have carried more weight had the office been given the benefit of a permanent leader these last two years.
Yesterday the Senate confirmed the nomination of Seitz, a superbly credentialed lawyer. Formerly a law clerk to U.S. Supreme Court Justice William J. Brennan, and a member of the Women's Bar Association, she becomes the 1st woman to head the office in a permanent capacity, and the 1st permanent head since 2004, when Jack Goldsmith, now a Harvard law professor, left.
Confirmation came not a moment too soon. Here's hoping Seitz can reclaim for OLC the governmental gravitas it once enjoyed.