On this day in ...
... 1987, speaking to a crowd of 20,000 persons at the Brandenburg Gate, in view of the then-26-year-old Berlin Wall that separated the city's West-Germany-governed portion from its Soviet-bloc eastern part (prior posts here, here, and here), U.S. President Ronald Reagan challenged the reform-minded Soviet leader Mikhail Gorbachev: 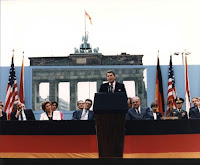