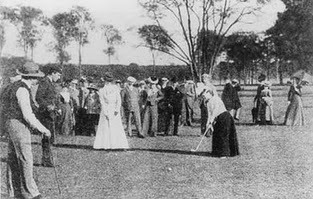 On this day in ...
... 1878, or possibly 1876 (accounts differ), Margaret Abbott was born in Calcutta, India. She grew up in Chicago, where her mother, Mary Ives Abbott, a writer, started a literary salon and frequented high society. While in Chicago the two Abbotts learned golf from the country's top amateurs. While in Paris -- where Margaret studied art from Edgar Degas and Auguste Rodin -- they learned of, and entered, a golf event at the 1900 Summer Olympics. Scoring 47 on a 9-hole course, 23-year-old Margaret became the 1st American woman to win an Olympic gold medal. (prior post) She did not enter again, having married humorist Finley Peter Dunne in 1902. Her mother, Mary, placed 8th in the same 1900 competition, depicted above right. (photo credit)