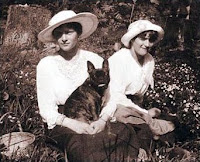 On this day in ...
...1901 (110 years ago today), Grand Duchess Anastasia Nikolaevna was born in Peterhof, Russia, the youngest of the 3 daughters of Tsar Nicholas II and Tsarina Alexandra, and the elder sister of the imperial couple's only son. Anastasia would die a month after her 17th birthday, executed along with the rest of her family during the Bolshevik Revolution. She's pictured at right with a sister, Tatiana, during their 9-month post-revolution captivity. (photo credit) Anastasia may be best known on account of impostors: her remains were not positively identified until 2009, and in the interim several women claimed to be the youngest grand duchess, asserting that she'd escaped death at Yekaterinburg. One impostor inspired a 1956 film starring Ingrid Bergman and a 1997 animated Disney spin.