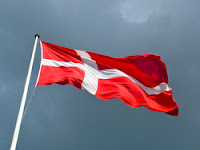 On this day in ...
... 1992, the electorate in Denmark rejected the Maastricht Treaty, which inter alia contemplated a single European currency, by a margin of fewer than 50,000 votes. A New York Times editorial wrote that the vote in Denmark (flag at left) (photo credit) reflected sentiment "[i]n several countries," to an "unease," "about surrendering the attributes of sovereignty to a centralized authority," that was "heightened by suspicions that the new Europe may be dominated by Germany and other big states." In the interim years, of course, subsequent European states' approval of integration treaties in fact led to that single currency, the euro -- and to current bailouts of smaller countries like Ireland, Portugal, and Greece.