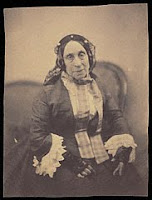 On this day in ...
... 1786, Marceline Desbordes-Valmore (left) was born in Douai in the north of France. Her family immigrated to Guadeloupe on a ccount of the French Revolution, but eventually she returned to Europe and appeared on stage in Paris and Brussels. A poet who led a "trouble life," Desbordes-Valmore, to whom a website is dedicated, wrote "melancholy, elegiacal poems" that "are admired for their grace and profound emotion." Honoré de Balzac is said to have modeled his title character in La Cousine Bette (1846) after her. Not well known now but popular in her day, Desbordes-Valmore "is the only female writer included in the famous Les poètes maudits anthology published by Paul Verlaine in 1884." By the time of that publication, she'd died in Paris a quarter-century earlier. (1854 photo of Desbordes-Valmore, made 5 years before her death by Nadar, from the collection of the J. Paul Getty Museum)