On this day in ...
... 1876 (135 years ago today), in what is now eastern Montana, the 2-day Battle of Little Bighorn, which pitted 263 members of the United States' 7th Cavalry against "several thousand" Lakota Sioux and Cheyenne warriors, began. At battle's end, all the U.S. personnel were dead -- among them Lt. 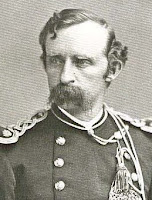 Col. George Armstrong Custer (right). (photo credit) Leading the Native American opposition was the Lakota chief Sitting Bull (left), who took his followers north to Canada after the battle. (photo credit) In 1881, Sitting Bull would return and surrender to U.S. forces -- and would be "killed by Indian police on the Standing Rock Reservation in South Dakota on December 15, 1890."