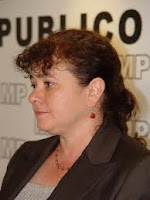 Culminating a decade of work by Guatemalan human rights and survivors’ groups and their supporters, Héctor Mario López Fuentes, former Chief of Staff of the Army during the regime of General José Efraín Ríos Montt, is under arrest in Guatemala.
Lopez Fuentes, now 81 years old, is accused of genocide, crimes against humanity, and forced disappearances in the early 1980s in the Guatemalan highlands.
Judge Carol Flores issued the arrest warrant. The Guatemalan public prosecutor's office announced the arrest on June 16.
The case against Lopez Fuentes was first filed by the Center for Human Rights Action (CALDH) in 2001. The other defendants included Rios Montt himself, who is now a member of Congress and thus protected by a limited immunity. The case had been stalled in the courts for a decade.
Lopez Fuentes is accused of 12 massacres in the Ixil region of northern Guatemala committed against Ixil Mayans.
Dr. Claudia Paz y Paz Bailey (above right), who became public prosecutor and Attorney General in December 2010, is the first woman to hold the post. She was selected by President Álvaro Colom after a previous candidate was forced to withdraw due to irregularities in the process and alleged ties to organized crime. Paz is a scholar of criminal law and human rights who worked for many years on women’s rights issues and was supported by civil society groups. She advised the U.N. Historical Clarification Commission on the issue of genocide; in its 1998 report, the Commission found that the army had committed “acts of genocide” in the Guatemalan highlands in the 1980s. (see executive summary of the report here).
One of the key pieces of evidence against Lopez Fuentes is the compilation of Army plans, reports, and documents known as “Operacion Sofia.” The document names Lopez Fuentes as one of the commanders of operations in the highlands. The document was introduced last year into the parallel case under way in Spain. That case, against many of the same defendants, has created a record of testimony and documents, many of which will be useful as the case in Guatemala moves forward.
The prospects for trial and conviction in this case are uncertain.
Guatemalan law allows for repeated delays in criminal cases as interlocutory challenges move through a lengthy appeals process. Many people involved in the genocidal campaigns of the 1980s still hold positions of power – including the country’s frontrunner for the presidency, Otto Perez Molina. If it is successful, the prosecution will be a breakthrough for the fight against impunity on a scale with the conviction of Peru’s former president Fujimori. Claudia Paz and her team deserve all the support they can get for their courageous effort.
by Naomi Roht-Arriaza at 6:04 AM