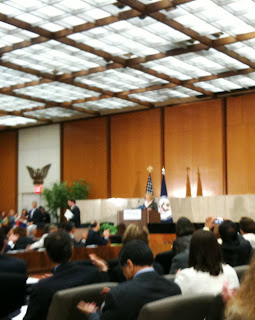 A Global Diaspora within the U.S.
Sixty-two million Americans are part of a first or second generation diaspora.
Among the most significant transnational connections maintained by such U.S. immigrant communities are the $48 billion in remittances sent home each year to countries throughout the globe. These monies and goods help raise children, feed families, build homes, provide healthcare and education, and respond to environmental and military disasters.
Further, as discussed here in the article Lionheart Gals Facing the Dragon and other pieces I’ve written on Jamaican migrant women, many maintain important transnational social and cultural ties as well.
But in addition to this massive “informal” flow of resources, many also start or develop businesses that employ thousands of workers in the U.S. or their countries of origin.

The Secretary’s Global Diaspora Forum
The Global Diaspora Forum (photo above, by Hope Lewis), co-sponsored by the Migration Policy Institute, the US Agency for International Development, the U.S. Department of State, and others, was attended by diplomats, development professionals, immigrants’ rights and human rights advocates, journalists, educators (including yours truly, IntLawGrrl Hope Lewis), and business leaders. The meeting highlighted ways that the global diaspora contributes to U.S. and international development.
Many diasporas were represented, including those from Barbados, China, Colombia, Cuba, Egypt, Ethiopia, Ghana, Greece, Haiti, India, Iraq, Ireland, Israel, Italy, Jamaica, Japan, Kenya, Lebanon, Mexico, Nigeria, Pakistan, South Korea, Uganda, and Vietnam, to name only a few. To the organizers’ credit, the historical African Diaspora was represented as well by the Director of the Smithsonian’s National Museum of African Art, Dr. Johnnetta Cole (photo, right, source here) and other African-Americans.
State signaled its commitment to diaspora issues through 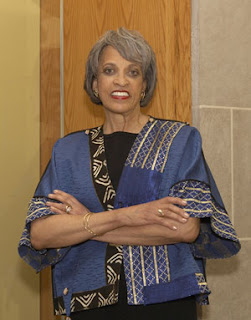 the presence of many high-level representatives such as Secretary of State Clinton, Undersecretary of State for Democracy and Global Affairs Maria Otero, Dr. Rajiv Shah, M.D., Administrator of the U.S. Agency for International Development, Leocardia Zak, Director of the U.S. Trade and Development Agency, and Gustavo Arnavat, U.S. Executive Director, Inter-American Development Bank, Fred Hochberg, Chairman and President of the Export-Import Bank of the United States, Mimi Alemayehou, Executive Vice President of the Overseas Private Investment Corporation, and Daniel Yohannes, Chief Executive Officer of the Millennium Challenge Corporation. Representation of U.S. Immigration, Customs, and Enforcement (ICE) were noticeably absent from the formal program, however, (as some participants pointed out in discussion sessions).
Topics covered during the three-day meeting included panel discussions on
►Diaspora News and Social Media
►Diplomacy
►Education
►Entrepreneurship
►Innovation and Technology
►Philanthropy
►Volunteerism

U.S.-Caribbean Partnerships
“Miss Lou” (my IntLawGrrls alter ego) was quite interested to learn that Secretary Clinton announced this week that the Caribbean will be the first focus of the IDEA initiative. During a June 22 High-Level Meeting between the Foreign Ministers of CARICOM (the Caribbean regional community) and the United States in Montego Bay, Jamaica, she announced several new efforts in U.S. foreign policy toward the Caribbean.
Security. Clinton announced $77 million in additional funds for the Caribbean Basin Security Initiative aimed at international and regional organized crime control.
Energy and Climate Change. She also announced Caribbean-focused projects to further the Obama administration’s 2009 Energy and Climate Partnership of the Americas. A new Caribbean Climate Change Adaptation Initiative will establish research links on climate change between the University of the West Indies (UWI) and U.S.-based universities.
A Caribbean IDEA. Finally, Clinton noted a Caribbean-focused project would be the first to test the IDEA initiative:

[A] new partnership … will enlist the Caribbean diaspora to contribute to long-term economic growth. We believe that the people of Caribbean descent can be a major asset for their countries of origins and not just because of the money that is sent home in remittances, but they can put their talent and their energy and their entrepreneurial spirit to work as well. To tap this potential, the State Department recently launched the International Diaspora Engagement Alliance…, which is intended to bridge the gap between diaspora communities and entrepreneurs in their countries of origin. We want to promote trade, help start businesses and develop other ways of spurring economic growth.
We have chosen the Caribbean to be the first region in the world to demonstrate the impact of this alliance. We are launching the Caribbean IDEA Marketplace, which will foster collaboration between local entrepreneurs and members of the Caribbean diaspora. And we hope that this marketplace, which will offer access to capital as well as technical assistance, will begin bearing results next year.

A public-private partnership, the Caribbean IDEA Marketplace is sponsored by the U.S. Department of State, the Inter-American Development Bank, Digicel (a telecommunications company), and Scotiabank. (See coverage by Jamaican news media here.)

Opportunities and Cautionary Tales
Although I have long called for greater attention to the roles of non-state actors, including business enterprises in addressing the status of people in and from the Caribbean, caution is required in assessing this new venture.
Markets, marketplaces, and the entrepreneurs who run them, are no strangers to Caribbean history and socio-economic context. The islands were key sites in the notorious and continuing crimes of the Trans-Atlantic slave trade and the related trade in sugar, rum, and spices. Subsequent colonial and neo-colonial arrangements led to the exploitation of everything from bauxite to oil to illegal drugs and the trade in small arms. International trade policies have had devastating impacts on small banana and coffee farmers. Human trafficking and export processing zones have exploited the availability of low-wage labor and the limited job opportunities available to young people in small countries.
Nevertheless, the islands are also rich in traditions of African agricultural methods, marketwomen networks, cultural exchanges in literature, music, and other arts, beautiful environments for sustainable tourism, trained health care workers, high literacy rates, and strong labor unions. Let’s hope that the new U.S.-Caribbean initiative emphasizes those positive traditions in ways that benefit the majority of people who need them most.

Governments and Human Rights
So, amid celebrations of global diaspora's tremendous potential, government and civil society must exercise caution as well as enthusiasm. The desired “development” and “growth” must never sacrifice a state's obligation to protect the human rights of the people over which it has jurisdiction. (That includes the human rights of noncitizens within its borders as we note in a post on migrants rights in the U.S. here. )
True development must center human development--and is not possible unless each state fulfills its obligation to respect, protect, promote, and fulfill human rights for all.
As a responsible international and transnational actor, the U.S. has taken on legal, political, and moral obligations to observe and promote human rights and fundamental freedoms both externally and internally. If recent rhetorical pronouncements are to be further realized, these must also include the economic, social, and cultural rights so important to migrant and diaspora communities (see IntLawGrrl and Huffington Post comments here and here.)

Business and Human Rights
There's also reason for caution and vigilance about the roles of business enterprises in the new initiative. Banks and wire transfer services profit handsomely from those billions of dollars in remittances moved between the U.S. and sending countries. What are they doing to promote human development where most needed?
Diaspora business leaders can help to develop new enterprises that create decent jobs and working conditions in countries of origin, but they can also try to take advantage of lax labor or environmental regulations back home in order to exploit low-wage workers and the environment.
As noted in a recent guest post by Nadine Bernaz, the UN Human Rights Council has just endorsed Guiding Principles on Business and Human Rights prepared by Professor John Ruggie, UN Special Representative on Business and Human Rights. The “respect, protect, remedy” framework provided was influenced and commented on by many business leaders, diplomats, and members of civil society. Human rights NGOs such as Human Rights Watch and Amnesty International remain critical that stronger accountability measures are needed to implement the Guiding Principles so as to make businesses accountable.
All relevant actors—the U.S. government, sending countries, the business sector, other private actors, and migrants themselves—must help to make human rights a reality for everyone. That would be the best “idea” of all.