To quell "sex selection," no substitute for courage 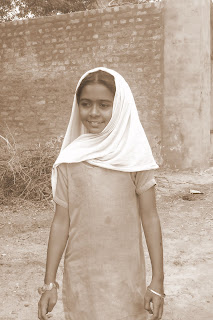 (Delighted to welcome IntLawGrrls alumna Mallika Kaur, who contributes this guest post, which builds on analysis in her 2009 California Law Review article on "Punjab's 'Missing Girls'")

'Most of India's population now live in states where selective abortion of girls is common.'

This is the conclusion in a recent Lancet article, which assessed sex ratios in India by studying three rounds of the National Family Health Survey covering the 1990-2005 period, and the birth cohorts of children aged 0 to 6 years in the 1991, 2001, and 2011 censuses. (2010 photos made by Mallika Kaura in District Sangrur, Punjab)
Particularly focusing on second-order births -- studying the sex of the second baby when the first is a boy versus a girl -- the study has especially telling findings: wealth and higher education do negate gender biases. The findings simply bear out what feminists have been pointing out for so long, so painfully: we need a holistic change in our attitude towards girls and women if we truly care about the millions of "missing girls."
Girls, especially two in one family, are unwanted by even the most wealthy and educated, so it is no surprise they are unwanted in homes with less wealth and education and thus more insecurity. Sex-selective abortions are a symptom of the larger problem of entrenched gender inequality. It is neither possible, nor desirable, to improve the sex ratios in isolation.
First, it is not possible to improve the numbers alone.
From a policy perspective, there are three possible responses to a social problem: criminalization, regulation, decriminalization.
Responding to embarrassing census figures and pressure from NGOs, India, which in 1971 had legalized abortion up to the twentieth week, criminalized sex-selective abortions in 1994 through the Pre-Natal Diagnostic Techniques (Regulation and Prevention of Misuse) Act, known by the acronym PNDT. As such abortions increased rather than decreased in the following decade, however, PNDT was amended in 2003 to "Pre-Conception and Pre-Natal Diagnostic Techniques (Prohibition of Sex-selection)."
These 2003 amendments responded to criticisms that had been levied at the 1994 Act; specifically, the amendments limited the use of latest pre-conception diagnostic procedures and mandated stricter registration requirements for ultrasound providers.
Yet legal enforcement remains very difficult.
Doctors often choose to ignore the law, in part by providing results orally -- an informal survey of gynecologists revealed signs such as “one thumb up, means a boy.” Further, ultrasound machines, which are regularly used for legitimate purposes during the second and third trimesters, also divulge the sex of the child. Regulation of private doctor-patient communications during ultrasounds is extremely difficult.
While regulation has not been entertained as the legal response to sex selection, potential regulatory measures are easily imaginable. India could, for instance, ban public advertisements promoting sex-selection; impose mandatory medical evaluations of women seeking sex-determinative tests; and require counseling for couples considering abortion. But, regulation could be tantamount to decriminalization, given that laws are not uniformly enforced and corruption is rampant.
Finally, decriminalization, in this environment, would likely encourage more sex-selective abortions. At the least, it would not improve the numbers.
Moreover, it is not even desirable to improve the numbers, in isolation.
Criminalization, regulation, and decriminalization are all inadequate feminist responses to sex selection:
► Criminalization threatens to punish the victims -- women are in a double bind since society pressures them to produce sons but the law penalizes them if they undergo sex-determinative tests or sex-selective abortions. Criminalization thus may compromise women’s health, by pushing them to illegal providers or even the age-old practice of infanticide.
► Regulation also could endanger women, threatening doctor-patient confidentiality and opening women to harassment.
► Decriminalization validates society’s prejudice against the girl child and removes protection for those women who might seek legal defense to resist coercion into sex-selective abortions.
Given the inadequacies of all these alternatives, it is not surprising that non-legal options, campaigns and public initiatives against sex selection, have been noisily pursued.
Such campaigns and initiatives focus on “naming, blaming, and shaming.” 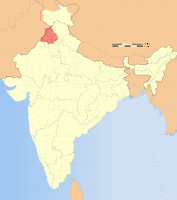 An example is the much-acclaimed ‘Nawanshehar model’ in Punjab. (credit for map showing Punjab state in dark red) Nawanshehar authorities claimed their efforts raised the sex ratio above 900 girls to 1,000 boys in 77 villages. The Nawanshehar approach involved vigorous shaming tactics. The District Commissioner galvanized a team of informants, including NGO workers and students, to track pregnancies. Villagers were paid up to 5,000 rupees (about $111) for calling a "hotline: to report suspicion of any woman considering an ultrasound or abortion. Staff then visited the woman to verify the information. In one reported case, officials arranged a "mock funeral" outside the home of a woman who had had a sex-selective abortion; volunteers chanted prayers for the fetus.
Although the ‘Nawanshehar model’ reportedly produced favorable statistics, it came at a severe cost to women’s well-being.
The shaming techniques penalize the woman, who might be simply acting on her family’s behest, and further ostracize her. The model also involves the invasion of a pregnant woman’s privacy. Monetary incentives to "report" pregnant women raise concerns about false reporting and undue harassment. Finally, the model is also likely unsustainable. The short-term flurry of activity hardly changes the forces under which women are devalued. This is not the desired route for sustainable change.
Acts of resistance to patriarchy by women themselves provide the seeds for real change.
Most times, patriarchy in India is accepted as "culture." This may be seen in justifications of the:
► Different standards applied while raising sons versus daughters;
► Different resources made available for education;
► Different expectations at weddings;
► Different allotment of household work for husbands versus wives and sons versus daughters;
► Different values placed on respective careers;
► Different demands on sons-in-law versus daughters-in-law;
► Different treatment of parents who live with married daughters versus sons; and
► Different reactions to inheriting family name or property as a son versus a daughter.
Given all these differences, it should be no shock that the girl, when she readies herself for mothering the next generation, does not favor birthing a girl.

Serious response to warnings such as The Lancet study requires one solution: fighting against deeply ingrained societal prejudices. This fight begins at home -- during our birthday parties, our weddings, our festivals, our living-room conversations. This fight requires courage. This fight alone will help find our "missing" girls, our missing balance and equality.