Who owns the body of the condemned?

The U.S. Supreme Court recently ruled that a Death Row inmate can ask to test crime-scene evidence that might prove his innocence. Nearly 20 years ago, a Texas jury had sentenced the inmate, Henry Skinner, to death for killing his girlfriend and her 2 sons. Before the Supreme Court's 6-3 judgment in Skinner v. Switzer (March 7, 2011), Texas prosecutors had refused to consent to the testing of items like knives, fingernail clippings, blood, and hairs.
But remedying the violation of Skinner’s civil rights by granting such a request does not mean that the tests will actually be carried out. All it does is add the support of a federal civil rights law, 42 U.S.C. § 1983, to the post-trial DNA testing issue. And there is no guarantee that any results will exculpate him. As Justice Ruth Bader Ginsburg (above right) wrote in her opinion, the results “might further incriminate Skinner.” (photo credit)
Now, another prisoner, Christian Longo, has raised questions, not about whether his civil rights have been violated, but about his rights to dispose of his own body– after execution. Guilty of murdering his wife and 3 children, this Death Row inmate wants to donate his organs after execution. The State of Oregon says he can’t.
Who owns the corpse? Does a person who is to be executed have no right to property, even his own body?
For some of us, the mere suggestion of delivering an executed criminal’s body to doctors is abhorrent. It recalls the 18th C. English practice of extending punishment for killers beyond the grave by having their bodies dissected by surgeons before burial, a desecration that could mess up bodily resurrection on the Day of Judgment. Britain's Anatomy Act 1832 abolished compulsory dissection, but still allowed people legally to donate their bodies to medicine. Jeremy Bentham famously did.
But contemporary punishment in the United States, especially the death penalty, raises other concerns that make us doubt our seemingly more enlightened practices.
Many forms of death flourish in US state prisons. Not just the practice of capital punishment by lethal injection, of dubious humanity, but also indefinite “solitary” in supermaxes, where prisoners are locked down without human contact for up to 23 hours a day, as if buried alive. While the death penalty in America is debated, contested, and in some cases suspended, we have invented a new form of death penalty, one which needs no judicial decision, carries no decent shame, is not open to scrutiny, and already stands in danger of killing more people than overt execution.
Longo’s case draws attention more to the vagaries of execution than to conditions of confinement.
In Baze v. Rees (2008), the Court upheld Kentucky’s method of lethal injection. It rejected the claim that the effects of the 3-drug protocol qualified as cruel and unusual punishment under the 8th Amendment. Even though the paralyzing drug pancuronium bromide leaves an improperly sedated inmate unable to move or cry out, but conscious and in excruciating pain, the Court ruled that the procedure is more humane, more dignified than others. In other words, it is less disturbing to witnesses.
Maybe the logic behind the state’s rejection of Christian Longo’s offer is that he has lost the right to property and to personhood. Is Longo’s body his own to give?
If a prisoner seeks relief from unlawful imprisonment, he has recourse to the legal writ of habeas corpus – Latin for “you may have the body.” But since Longo is imprisoned for good and lawful reasons and condemned legally to die, perhaps he has no right to his body, and no posthumous interest in it.
Jerry Cruncher, the “resurrectionist” of Dickens’ A Tale of Two Cities (1859), exhumed bodies and gave them up for dissection. The court ruled that he was not committing larceny but just a misdemeanor, since a corpse was res nullius: it belongs to no one.
The real problem in allowing soon-to-be executed prisoners the choice of organ donation is that this last act would redeem them in a variety of ways.
Vile murder be atoned for by a final act of altruism. More significantly, the choice itself would, in death, return to the prisoner the personal agency and, hence, they identity the state has tried to remove in life. If upon conviction of a felony a prisoner becomes dead to the law as no innocent person can be, then this choice would not only allow him to re-possess the self but to reverse the degradation caused by the state. 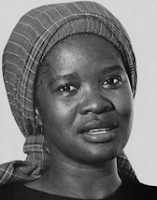 But moving from the condition of zombie – “flesh that takes directions from someone,” in the words of Jamaican novelist Erna Brodber (left) – into a full-fledged personality would threaten the grim technologies of state power. (photo credit) No longer condemned as monstrous, nor excluded from belonging, in physical death the murderer would rejoin the human community.