AU v. ICC, yet another round

The regional organization for Africa once again has condemned the global criminal court.
The Associated Press reported yesterday that the African Union, meeting at a summit in Malabo, Equatorial Guinea, had

called on its members to disregard the International Criminal Court’s arrest warrant for Moammar Gadhafi ...

As posted, warrants issued last Monday against that leader of Libya, his son, and an aide. The 3 are charged with

crimes against humanity (murder and persecution) allegedly committed across Libya from 15 February 2011 until at least 28 February 2011, through the State apparatus and Security Forces. 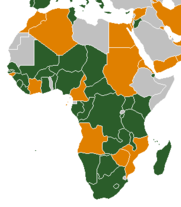 Fully 31 of the African Union's 53 members also are states parties to the Rome Statute of the ICC, and thus have pledged to cooperate with that court. (credit for map showing ICC members in green and signatories in gold) Yet relations between the 2 intergovernmental organizations have been tense, as discussed in posts available here. And it appears that at least some of them now have sided with Qaddafi, formerly the head of the regional group as well as the longtime head of Libya, an ICC nonparty. Thus it's conceivable one or more of these member states might be willing to give safe harbor should Qaddafi choose exile -- a possibility that, as the AP observed,

seriously weakens the tribunal’s ability to bring the embattled Libyan leader to justice.

'Gaddafi should put the well-being and the interests of his own people first and he should step down from power.'

The African Union move further appears to have destabilized efforts to end combat in Libya: a spokesperson for the rebel group Libyan National Transition Council reportedly has announced the rebels' decision to reject the peace plan -- on account of the African Union decision not to honor the warrant.
(Notably, last week another member of the Council met with ICC Prosecutor Luis Moreno-Ocampo at the court's Hague headquarters, above right. (photo credit))
At issue, of course, is the ICC's role in Africa.
All 6 situations before the court concern states in Africa: Kenya; Uganda; Central African Republic; the Democratic Republic of Congo; Darfur, Sudan; and Libya. Approaching that status is a 7th African state: Moreno-Ocampo in late June asked permission to open an investigation in Côte d'Ivoire.
It is true that nearly all these matters are before the court on account of a referral from the U.N. Security Council or from the territorial state in question. The only exception is Kenya, where the prosecutor is exercising proprio motu powers granted him by statute.
It is also true that violence and atrocity occurred in each state -- that, as ICC Deputy Prosecutor Fatou Bensouda has said, there are victims and others in Africa's civil society who welcome the court's efforts to effect accountability.
These truths seldom appear in stories like yesterday's. The story did, however, include the now-familiar African Union critique, that the ICC is "an instrument of neocolonialism" and "a European Guantanamo Bay."
There must be more the court could do to defuse such hostility.
Speedier and more transparent attention to atrocities elsewhere in the world, in states of all sizes, might not put an end to these labels. But it might keep the labels from seeming to stick so easily.