Bulgaria's duties to its Roma people

(Delighted to welcome back alumna Gay McDougall, who contributes this guest post) 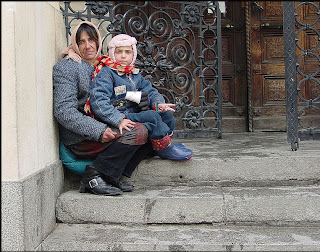 SOFIA, Bulgaria – In my official capacity as the U.N. Independent Expert on minority issues, I have called upon the government of Bulgaria to match its policies on Roma integration, which were inspired by the European Union and nongovernmental organizations, with government-led implementation and the financial resources necessary to improve the living conditions experienced by the Roma people. (credit for photo of Roma mother and child in front of a church in Sofia)
This call came at the conclusion of my July 4-11 visit to Bulgaria pursuant to my mandate to promote implementation of the U.N. Declaration on the Rights of Persons Belonging to National or Ethnic, Religious and Linguistic Minorities and to identify challenges as well as positive practices with regard to minority issues. My preliminary views, set forth below, will contribute to the report that I will present to the U.N. Human Rights Council.
I went to assess the situation of minorities – particularly the Roma, Turkish and other Muslim minorities – in Bulgaria, and to consult on the country’s legislation, policy, and practice relevant to minority rights, anti-discrimination, and equality.
In my view, government initiatives and financial commitments are having little more than superficial impact, and are failing to address the entrenched discrimination, exclusion, and poverty faced by many Roma, who comprise a tenth of Bulgaria’s population. (credit for map below right)
I was alarmed at the general conditions in the Roma communities I visited, including Fakulteta in Sofia, and Stolipinovo in Plovdiv. Having found minimal evidence of a strong government commitment to Roma equality, I remain unconvinced that ensuring such equality is a high priority for the current government. 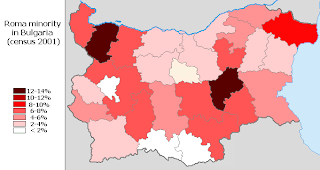 In key areas like housing, employment, education and health care, the evidence demonstrates that Roma remain in desperate circumstances, at the very bottom of the socioeconomic ladder.
Roma people experience discrimination in all walks of life that leaves them totally marginalized and in persistent poverty. Unemployment rates soar to over 80% of the entire Roma population (40% of those of working age), and life expectancy rates are estimated to be over 10 years less than the average. Of the substantial number of Roma in the capital city of Sofia, for example, at least 70% live in dwellings not considered eligible for infrastructure services. They have no running water, sewage, paved streets, waste collection or street lights.

Education
While Bulgaria was among the first European countries to acknowledge the need for desegregation of Roma children in education, 50% to 70% of Roma children are in substandard, de facto segregated schools in Roma neighborhoods that lack municipal transportation. Their parents fear the racist treatment their children likely would face in distant majority schools. The children consistently underperform in educational outcomes compared to other children, have high dropout rates, and high levels of illiteracy.
Initiatives to transport children daily to mixed schools outside Roma ghettos and to provide school meals and support services to the students have been implemented largely by a small number of poorly resourced NGOs, the lion’s share of whose funding comes from international sources.
The Ministry of Education has established the Center for Educational Integration of Children and Students of Ethnic Minorities, which serves as the primary funnel for international funding. Some emphasis has been placed on preschool education and some funds have gone to municipalities to refurbish physically decrepit segregated Roma neighborhood schools. A Regional Inspector in the Pazardzhik District explained efforts to work with Roma parents to encourage school attendance. However, her description of efforts at desegregation focused on limiting the number of Roma children to 4 or 5 per class, “in order to avoid tensions.” On the other hand, one school principal at the same meeting described his school as having achieved a 50-50 student body.
While Bulgaria’s Constitution, National Education Act, and strong Protection Against Discrimination Act all make discrimination in education unlawful, no court has ordered Government to comply with its obligation to desegregate schools.

Political and Societal Treatment
Officials shared numerous policy documents outlining governmental commitments to desegregation and inclusion of Roma with respect to employment, housing, and health care. However, discussions with the responsible agencies revealed a shallow commitment with little evidence-based programming, benchmarking, monitoring, or evaluation.
There was clear resistance both to the use of ethnicity-based disaggregated data and to the notion of using special measures to address longstanding inequalities in disadvantaged communities, such as the Roma.
Notwithstanding the evident effects of the current financial crisis on the wider Bulgarian economy, the message sent by the government’s woefully inadequate budgetary commitment is discouraging. The small, inconsistent pilot project-based approach that has been undertaken will never reach the transformative tipping point necessary to confront the vast socioeconomic challenges faced by the Roma.
The level of racial prejudice against Roma in Bulgaria was evident.
Journalists and NGOs noted the overwhelmingly negative media coverage and discriminatory stereotyping of the Roma. I was deeply concerned by comments from some high level government officials that strongly indicated that they viewed Roma communities as predominately a criminal element.
Roma remain vastly underrepresented in political institutions and decisionmaking bodies at both the national and local levels. There is currently only one Roma member of Parliament, plus a limited number of mayors and local government councilors.
Roma community leaders and local officials frequently voiced their frustration at the government's failure to constructively address the infrastructure problems of most Roma neighborhoods of significant size, such as Stolipinovo and Fakulteta (over 40,000 each).

Mistreatment of Culture
I also heard testimony about:
► Attacks on mosques and religious buildings,
► Attempts to manipulate public sentiment against minority religious and ethnic groups for political gain,
► An inhospitable climate for the free expression of minority ethnic identities, and
► Poor enforcement of anti-discrimination and hate speech legislation.
I commend those government and civil society leaders who immediately and loudly condemned the attack this past May on the mosque in Sofia. Political parties that associate themselves with hate-motivated acts of violence should have no place in government, and their culpable members must be promptly prosecuted.

Positive interactions
I met many committed people working at the level of local authorities – mayors, local councilors, and experts. Their efforts need greater support, financial resources, and legislative and other commitments from the national government.
The work of the Commission for Protection Against Discrimination and the Ombudsman deserves commendation. Resources available to them should be increased and their capacities strengthened to enable them to fulfill their potential to fight discrimination and promote equality in Bulgaria.