Having written in yesterday's post on "Making Justice Systems Work for Women," today I will focus on "Gender Justice and the Millennium Development Goals." These subtitles refer to the first and second parts, respectively, of Progress of the World’s Women: In Pursuit of Justice, a report that, as IntLawGrrls posted, was recently released by UN Women.
The second part of the UN Women report brings a gender perspective to evaluation of the progress that has been made with respect to realization of the United Nations' Millennium Development Goals. Agreed to by 189 countries in 2000, these goals consist of eight quantitative benchmarks that comprise a framework for eradicating poverty by 2015 (bottom) (image credit).
The most recent progress report on the goals by the United Nations Secretariat acknowledges shortcomings in the realization of the goals for women and girls. In contrast, UN Women’s report evaluates global progress toward the goals through a uniquely gendered lens, as follows:

Goal 1: Eradicate extreme poverty & hunger
The UN Women report notes that although global poverty rates have declined, the number of unemployed women rose, from 76 million in 2007 to 87 million in 2010.
Women in Latin America, the Caribbean, and sub-Saharan Africa are more likely to live in poor households than men. Even within households, women are less likely than men to earn cash income and, perhaps more disturbingly, 34% of women who do earn cash income have no say in how that money is spent.
Finally, the report notes that millions of women are doubly burdened by family care and domestic labor, and this further limits their choices, by preventing them from pursuing education and paid employment. The report observes that labor-saving technology such as fuel-efficient stoves, combined with affordable child care, will reduce women’s workloads and facilitate a more equitable division of household labor.

Goal 2: Achieve universal primary education
Primary school enrollment has risen for girls -- with 96 girls now enrolled for every 100 boys, up from 91 girls for every 100 boys in 1999. Yet girls remain unlikely to complete even primary education. In the Middle East and North Africa, for example, 25% of women aged 17 to 22 have fewer than four years of schooling, compared to 11.5% of men.
The education gender gap is particularly wide in rural areas. The report notes that Bolivia has made significant strides in narrowing the educational gender gap in remote areas by establishing satellite schools, which send teachers to isolated communities. Between 1992 and 2001, the percentage of rural girls who completed six years of schooling in Bolivia jumped from 47% to 74%.

Goal 3: Promote gender equality & empower women
Women have made little headway in advancing in the workforce in the past two decades. Between 1990 and 2009, the percentage of women in wage employment outside the agricultural sector rose to just 40% from 35%. Yet the Report notes that while the number of women in parliaments around the world has increased, female legislators still only account for 5% of parliamentary members globally. And even though secondary school enrollment for young women has increased in a manner similar to that of primary school enrollment, attendance rates are low and significant gaps exist between the urban rich and the rural poor in part because of poverty, early marriage and discrimination. The Report advocates the use of stipends to keep girls in school and quotas to increase women’s participation in government. Rwanda’s Constitution, for example, requires that at least 30% of its parliament be comprised of women. As noted in yesterday’s post, women’s critical mass in that legislature has already led to important legislative reforms for women.

Goal 4: Reduce child mortality
The overall mortality rate for children under 5 has dropped from 89 deaths per 1,000 live births in 1990 to 60 per 1,000 in 2009. However, prenatal sex selection and infanticide has led to significant gender disparities in child mortality rates, particularly in Asia. (See this post by IntLawGrrl guest/alumna Mallika Kaur and this NPR report.)
The UN Women report observes that the Republic of Korea -- where in the 1980s 114 boys were born for every 100 girls -- has reduced this disparity by investing in girls’ education and by promoting women’s employment. These initiatives have helped to reverse the perception that girls are a financial burden on the family. 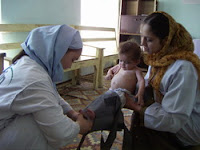 Goal 5: Improve maternal health
Only 14 countries are on target to reduce maternal deaths by 75% by 2015. This is a shocking statistic, given that up to 70% of such fatalities are preventable through health services and family planning resources. (credit for photo of maternal health clinic in Afghanistan)
Over 300 million women around the world suffer longterm health consequences and disabilities stemming from pregnancy or childbirth complications. Reduced aid for family planning, rural isolation, user fees, and lack of female staff at health care centers are some barriers to accessing the services needed to combat this epidemic. Consider that once user fees were no longer required in Burundi, the number of women giving birth in hospitals jumped 61%.

Goal 6: Combat HIV/AIDS, malaria and other diseases
Women have borne the brunt of the AIDS epidemic disproportionately. Over half the 33.3 million people living with AIDS worldwide are women.
Women are particularly vulnerable to infection as a result of poverty, violence, and discriminatory customs.
Once infected, women are further victimized. In China, for example, twice as many women as men report having been physically harassed and threatened because of their HIV status. According to the report, the Chinese government has launched a widespread campaign to combat HIV stigmatization.

Goal 7: Ensure environmental sustainability
The report notes that, because women perform the majority of the world’s agricultural work and are heavily impacted by weather-related disasters, they suffer the effects of climate change disproportionately.
Yet, women are often excluded from environmental policy discussions. An analysis of 423 National Adaptation Programs of Action reveals that only 16% of such plans refer to women when discussing food security or water. Less than 20% mention women in the context of health.

Goal 8: Develop a global partnership for development
The good news is that overseas development assistance has risen over the past decade and, by 2015, will have reached $126 million per year.
The bad news is, programs targeting gender equality are not reaping the benefits.
Programs in which gender equality was a secondary (but significant) component accounted for less than 30% of funding from the Organization for Economic Cooperation and Development-Development Assistance Committee between 2007 and 2009.
In November and December of 2011, the fourth High Level Forum on Aid Effectiveness will be held in the Republic of Korea. The report recommends adopting concrete actions to achieve gender equality at that meeting.

Conclusion
When it comes to gender equality, much needs to be done with respect to reaching the Millennium Development Goals. As the report put it:

'With only four years left until the target date of 2015, ending gender-based injustices that create barriers to women’s and girls’ opportunities must be the centerpiece of further action.'