In Siem Reap, tempest over a temple 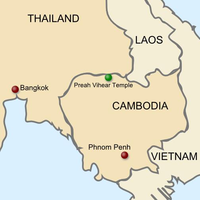 SIEM REAP – We’ve just arrived in this city, the launching point to visit the spectacular Angkor Wat temple complex.
The big news here is Monday's International Court of Justice order for provisional measures in the Request for interpretation of the Judgment of 15 June 1962 in the case concerning the Temple of Preah Vihear (Cambodia v. Thailand) (Cambodia v. Thailand).
Made pursuant to Article 41 of the ICJ Statute, provisional measures are akin to the issuance of a preliminary injunction in U.S. litigation practice.

The dispute
As Jaya posted in May, the matter arose out of an April 2011 request by Cambodia that the ICJ, pursuant to Article 60 of its statute, interpret its June 1962 judgment in Preah Vihear. In that earlier opinion, the Court had declared that

notwithstanding that the temple (right), being on an escarpment, is geographically more accessible from Thailand.
The ruling was premised in part on interpretations of French maps, drawn up in 1907 by the Franco-Siamese Mixed Commission, which placed the territory in Cambodia. Thailand had helped generate these maps, and subsequently used them for its own purposes, suggesting an acceptance of their contents. As a result, international lawyers normally cited the ICJ's June 1962 opinion in Preah Vihear for the principle of estoppel, which the court identified as a general principle of law as contemplated by Article 38(1)(c) of its statute.
Yet Thailand now opposes the placement of the temple in Cambodia.
In 2008, UNESCO listed the temple as a World Heritage Site, one of two in Cambodia. In response to this statement that the temple is situated in Cambodia, Thailand withdrew from both the 1972 Convention Concerning The Protection Of The World Cultural And Natural Heritage and the World Heritage Committee.
Additionally, Thailand has launched a number of military incursions into the area since 2008. Clashes between government forces on both sides have resulted in casualties and the destruction of property – including harm to the temple itself.
Clashes intensified this year, fueled – it appears – by assertions of Thai nationalism in the face of domestic political turmoil.
In February 2011, Cambodia brought the conflict to the attention of the U.N. Security Council, which called for a permanent ceasefire to be established between the two parties and expressed its support for the efforts of the Association of Southeast Asian Nations to find a solution.

Arguments before the ICJ
In its recent pleadings before the ICJ Thailand, in an effort to defeat the request for provisional measures, advanced the argument that the original ICJ opinion related only to the temple itself, and not to the entire area surrounding it, where the recent clashes have occurred. Similarly, it argued that the court did not delineate the entire frontier between the countries, which remains contested, in Thailand's estimation.

Cambodia countered that by determining that the temple falls within Cambodian sovereign territory, the ICJ by implication had determined the border between the two countries, at least with regard to the temple vicinity. Thai incursions, it contended, thus are akin to violations of Article 2(4) of the U.N. Charter. On the strength of the original opinion, Cambodia has argued that Thailand remains under a continuing and general duty – rather than a mere instantaneous duty applicable only in 1962 – to withdraw its troops from the area and to respect the integrity of Cambodian territory.

ICJ ruling
In Monday's order in this current Preah Vihear dispute, the ICJ first determined that

all armed forces should be provisionally excluded from a zone around the area of the Temple, without prejudice to the judgment which the Court will render on the request for interpretation submitted by Cambodia.

The Court then defined this zone with reference to particular coordinates, mapped above left. In addition, the parties were ordered to continue to cooperate with ASEAN and to allow observers to have access to the provisional demilitarized zone. 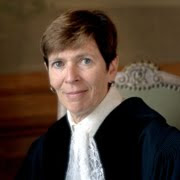 The newly appointed American judge, Joan E. Donoghue (right) (prior IntLawGrrls posts), voted with 4 other judges against the establishment of the demilitarized zone. Moreover, she was the sole judge to vote against all other aspects of the provisional measures. This passage of Donoghue's dissenting opinion sums up the basis for her deliberations:

Without a doubt, the Court hopes that the measures that it indicates today will defuse a tense situation and thus will protect lives and property. This is a laudable goal, but it cannot overcome a lack of jurisdiction to impose the measures contained in today’s Order. Accordingly, I have voted against those measures.

At the scene
Here in Siem Reap, our guide announced with confidence that now that the ICJ has ruled, it is perfectly safe to visit the temple.
Such faith in international law.
But, do I subject my children, who've accompanied me on this voyage, to potentially risky international law tourism?
Stay tuned...