This year adds an exciting new venture to IntLawGrrls' annual cosponsorship of a convocation of the women and men who prosecute persons charged with international crimes.
To be featured at next month's International Humanitarian Law Dialogs will be the 1st Annual Katherine B. Fite Lecture, a keynote address in honor of a pivotal lawyer at the International Military Tribunal.
Our colleague John Q. Barrett spoke about Katherine Boardman Fite (1905-1989), the 1st of several women at Nuremberg, at the 2009 IHL Dialogs. His consequent article on her contributions to international criminal law -- and on her experiences as one of very few 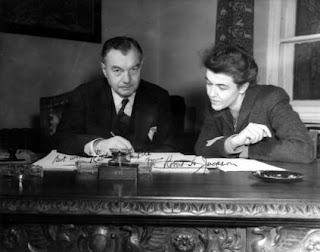 professional women in the early days of the Nuremberg trials -- was published, as "Katherine B. Fite: The Leading Female Lawyer at London & Nuremberg," in the 3d IHL Dialogs Proceedings available here.
A 1930 Yale Law graduate, Fite was a State Department attorney assigned to work with the U.S. Chief Prosecutor, Justice Robert H. Jackson. (credit for above photo of Jackson and Fite) Her international law experience was critical to the 1945 drafting of the IMT Charter in London and the initial groundwork for the tribunal. Her papers, which include highly readable letters from Nuremberg to her parents in Massachusetts, were donated to the Truman Library and are available online here. 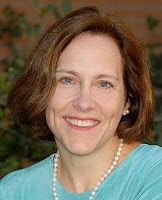 Honored to say that yours truly, IntLawGrrl Diane Marie Amann (left), will deliver the inaugural Fire Lecture. Other 'Grrls are sure to follow in the coming years.
As in past years (prior posts), this 5th installment of the IHL Dialogs will be held August 28-30 at the Chautauqua Institution in upstate New York, not far from the Robert H. Jackson Center, a chief cosponsor of the event. This year's conference title: "Widespread & Systematic!" Crimes Against Humanity in the Shadow of Modern International Criminal Law.
Again central to the Dialogs will be the gathering of present and former international prosecutors. Scheduled to return are:

Sunday, August 28
► 2 p.m. Screening of The Response (2009), a film that uses as its script actual transcripts from detainee hearings of Combatant Status Review Tribunals at Guantánamo. Q&A to follow.

► 2:30 p.m. Bassiouni, Schabas, and Ambassador Hans Corell, former Under-Secretary-General for Legal Affairs and Legal Counsel of the United Nations, will discuss the Crimes Against Humanity Initiative, on a panel moderated by the Initiative's founder and driving force, IntLawGrrls guest/alumna Leila Nadya Sadat (right).
► 8 p.m. Keynote speech by Corell, introduced by Leila.
Tuesday, August 30
► 8:30 a.m. As described above, yours truly will deliver the 1st Annual Katherine B. Fite Lecture.