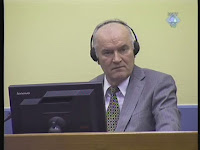 Wear cap.
Wave to gallery.
Complain of ill health.
Reject lawyer.
Refuse to enter plea.
Get self ejected.
The spectacle at Gen. Ratko Mladić’s appearance before the International Criminal Tribunal for the former Yugoslavia yesterday followed a familiar playbook. (credit for hearing photo of Mladić, courtesy of ICTY; video of appearance available here)
The hearing mimicked aspects of the appearance made 10 years and 1 day ago by former Serbian President Slobodan Milošević, and more recently by former Bosnian Serb leader Radovan Karadžić, each of whom has faced charges similar to those now laid against Mladić.
What's next?
It will be essential to establish the defence team, given that Mladić reportedly won't talk with his court-appointed lawyer. Like Milošević, and Karadžić before him, Mladić well may seek to represent himself at trial.
Unless, that is, he refuses to participate at all.
Such tactics may be all that's available to Mladić. Prosecutors will have at hand evidence amassed in scores of trials as they work to connect dots between already-convicted underlings and their general. (Today, meanwhile, a Dutch court held the Netherlands responsible to compensate victims on account of Dutch peacekeepers' handover of 3 Bosniaks to Serb troops led by Mladić, amid the 1995 seizure and massacre at Srebrenica.)
The earlier ICTY cases show that although disruption can delay, it cannot stop proceedings: the Milošević trial ended only with his death in 2006, while that of Karadžić, begun in 2009, still goes on.