(IntLawGrrls is pleased to welcome back alumna Natalie Bridgeman Fields, who contributes this guest post)

Last November, I wrote a guest post discussing the importance of the U.S. Organisation for Economic Cooperation and Development National Contact Point as a potential soft law vehicle that could be used to hold multinational corporations accountable for their responsibilities under the OECD Guidelines for Multinational Enterprises. (image credit)
The OECD Guidelines have just been revised to include an explicit provision on human rights for the first time -- and they still maintain strong provisions on environmental issues, information disclosure and other issues.
At the time of my last blog post, the U.S. National Contact Point was undergoing a review at our urging. Through it, Accountability Counsel, the nongovernmental organization for which I serve as Executive Director, and many other NGOs provided extensive comments and suggestions for reform of the mechanism. At the time, our unusually diverse coalition of civil society groups -- many of us who served on the National Contact Point Subcommittee of the Advisory Committee for International Economic Policy -- was hopeful that the U.S. National Contact Point would become an accessible and effective mechanism to raise complaints for communities harmed by the activities of multinational corporations around the world. 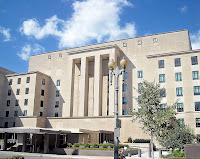 by Natalie Bridgeman Fields at 6:13 AM