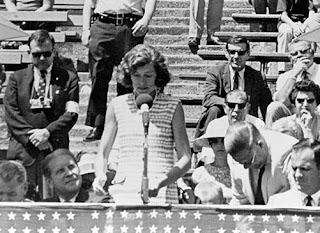 On this day in ...
... 1921 (90 years ago today), in Brookline, Massachusetts, a daughter, Eunice, was born to Rose Fitzgerald Kennedy and Joseph P. Kennedy Sr. She was the 5th of what would be the couple's 9 children. Her siblings included a brother who would become the U.S. President and 2 others who would seek that post while U.S. Senators. As indicated in this post by Hope Lewis, Eunice Kennedy Shriver made her own contributions to public service. They ranged from service in the U.S. Department of State Special War Problems Division to the founding of the Special Olympics. (credit for 1968 photo of Kennedy Shriver opening the inaugural Special Olympics Games at Chicago's Soldier Field) She died at age 88 in August 2009, just 2 weeks before the death of her last surviving brother, Sen. Edward M. Kennedy.