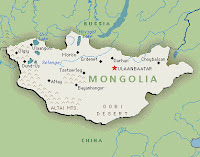 On this day in ...
... 1921 (90 years ago today), Mongolia declared independence from China -- again. It had made a similar declaration in 1911, but armed conflict and occupation had blocked full exercise of that claim in the interim decade. Today the Republic of Mongolia, slightly larger than the U.S. state of Alaska, has more than 2.7 million people, 95 percent of whom belong to the Mongol ethnic group. (map credit)