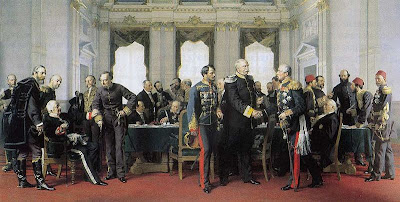 On this day in ...
... 1878, the month-long Congress of Berlin, which had been dominated by German Chancellor Otto von Bismarck, ended with the signing of the Treaty of Berlin. This treaty supplanted a bilateral Russia-Turkey pact earlier in the year with changes necessary to avoid a crisis involving Russia and Britain. Russia did not fare well in the new agreement. The Berlin treaty, which also dealt with Austro-Hungarian claims in southeastern Europe, "failed to consider adequately the aspirations of the Balkan peoples themselves and, thereby, laid the foundation for future crises in the Balkans." (credit for 1881 painting by Anton von Werner of diplomats at the Congress of Berlin)