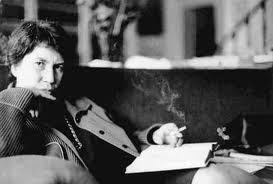 On this day in ...
... 1916 (95 years ago today), a girl was born in Palermo, Sicily, to a comparative anatomy professor and the daughter of a socialist lawyer. Natalia, as she was named, was taught at home until she entered a high school. Then, at a university in Turin, Italy, she studied letters. She did not complete a degree but began publishing her writing -- 1st, a collection of short stories. Married in 1938 to a politically active anti-fascist of Jewish Russian origin, Natalia Ginzburg (above left) followed her husband to a village in the Abruzzo region, where he was interned during World War II. (photo credit) There she wrote her 1st novel. Released from internment, the husband began to work for the resistance in Rome, was arrested, and died in prison. A widow with 3 children, Natalia Ginzburg continued writing and was elected to Parliament. At her death in 1991, she was a renowned author of novels, short stories, essays, and plays. "Arguably the most important woman writer of post-World War II Italy," Ginzburg in her writings "explored family relationships, politics during and after the Fascist years."