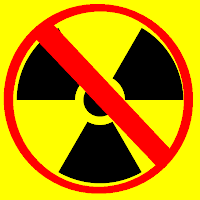 On this day in ...
... 1955, 52 Nobel Prizewinners, many of them scientists, signed the Mainau Declaration, which called for an end to nuclear weaponry. (image credit) Signatory Linus Pauling, an Oregon-born, California-based scientist who'd been awarded the Prize in Chemistry in 1954, would win the 1962 Nobel Peace Prize for his antinuke efforts; at the presentation ceremony the declaration was quoted in full:

We, the undersigned, are scientists of different countries, different creeds, different political persuasions. Outwardly, we are bound together only by the Nobel Prize, which we have been favored to receive. With pleasure we have devoted our lives to the service of science. It is, we believe, a path to a happier life for people. We see with horror that this very science is giving mankind the means to destroy itself. By total military use of weapons feasible today, the earth can be contaminated with radioactivity to such an extent that whole peoples can be annihilated. Neutrals may die thus as well as belligerents.
If war broke out among the great powers, who could guarantee that it would not develop into a deadly conflict? A nation that engages in a total war thus signals its own destruction and imperils the whole world.
We do not deny that perhaps peace is being preserved precisely by the fear of these weapons. Nevertheless, we think it is a delusion if governments believe that they can avoid war for a long time through the fear of these weapons. Fear and tension have often engendered wars. Similarly it seems to us a delusion to believe that small conflicts could in the future always be decided by traditional weapons. In extreme danger no nation will deny itself the use of any weapon that scientific technology can produce.
All nations must come to the decision to renounce force as a final resort. If they are not prepared to do this, they will cease to exist.