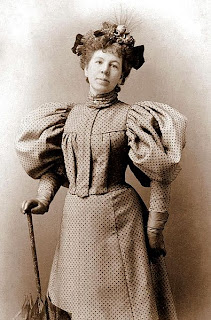 ... 1849, Clara Foltz (right) was born in Lafayette, Indiana. (credit for circa 1900 photo) Her family moved to Iowa, and at age 15 she eloped with a farmer, moving 1st to Oregon and eventually to California. The husband deserted her and their 5 children. She embarked on a 56-year career in law, suing successfully for admission to Hastings College of the Law in San Francisco, then spearheading legislation allowing women to practice in California. She was the 1st to do so, in 1878. In addition to practicing, she pushed for women's rights legislation. At the 1893 world's fair in Chicago, she gave birth to the public defender in a speech, entitled "Rights of Persons Accused of Crime--Abuses Now Existing," during the 1893 World's Fair in Chicago. A woman of many 1sts -- 1st woman clerk of the State Judiciary Committee, 1st woman on the State Board of Corrections; 1st woman notary public, 1st woman bank director, 1st woman deputy district attorney, and 1st woman to run for Ca

lifornia governor -- Foltz, who died in 1934, is the subject of a new biography. Woman Lawyer: The Trials of Clara Foltz (2011) is our colleague, Stanford Law Professor Barbara Babcock (left), a noted legal historian who maintains the Women's Legal History website.